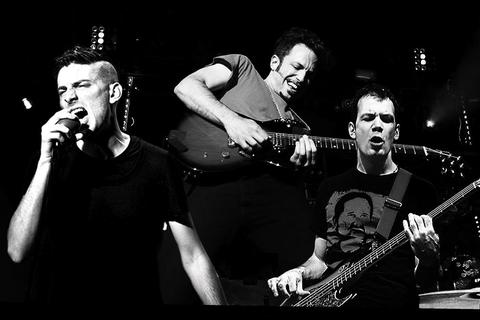 Outernational is one of the few bands that means serious fucking business.

“There’s part New York City rock & roll band in them, and then there’s the myriad of world music influences that drives these songs," describes Tom Morello of Rage Against The Machine, "Outernational is an uncompromisingly, politically revolutionary band.”

The New Yorker writes, “Channeling the radical stance and the disregard for stylistic parameters that were a hallmark of The Clash, New York City’s Outernational is hellbent on restoring righteous indignation to rock and roll.” The Village Voice describes the band's live show as “Coupled with dynamic rhythms that somehow flow together like streams of water, their ripped-from-the-headlines lyrics of liberation struggles had the audience literally, in the case of one wild fan in a Mexican wrestling mask, hanging from the rafters.”

Collaborator with the band, Chad Smith of the Red Hot Chili Peppers has said, "Seeing is believing. They are down for the cause. They live it; it is no bullshit. It’s awesome and humbling and inspiring all at the same time. The new grassroots movement has Outernational for soil. I've never worked with more focused individuals who really want change to happen through their music.”