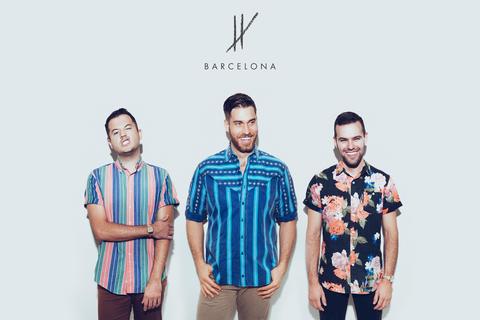 Close your eyes and imagine your second kiss. Forget the first one, that nervous smooch fueled by hormones and peer pressure, and fast forward to the one where you get it right. Maybe it was an intense make-out to slow jams on the Homecoming dance floor, or in the backseat of the Honda you borrowed from your mom. But in the glow of the headlights or neon nights, if you listened closely, you'd hear Barcelona.

The Seattle-based trio Barcelona makes soulfully sultry rock seeped in synth wash and falsetto that could score the soundtrack to late night necking seshs and uncouth after-hours adventures. Perhaps Barcelona is the soundscape to white blazers and mirrored tables, the sleek sound of questionable decisions that you won't regret later.

It's a new direction for an established band who were once signed to Universal Records, where they became well-known for melodic, piano-based indie ballads. Now, their evolution continues, as they chart a distinct course with a new vision. "Sonically and visually things have changed," drummer Rhett Stonelake says. "[Singer/songwriter] Brian Fennell is now playing guitar, having previously played keyboards, and we have a new member Branden Cate dedicated to playing a new palette of synths/keys." Fennell continues: "We were exploring new territory with new instruments, which kind of felt like moving to a new country for a year without really knowing the language and just jumping in. At times, it made me laugh uncontrollably because we would have never made music like this five or even three years ago. It showed me how seriously to not take myself or the band."

Barcelona's latest effort, collectively entitled The Melodrama, is a triptych of sonic textures shifting in tone between three EPs: Love Me, Love You, and Know Love. "We originally planned to release one EP," Fennell says. "We thought that the shift in style and sound would be better digested in a small dose initially, but as we progressed and more songs were born, we kind of said 'screw it, let’s release all of them.'"

The 13 tracks were recorded over ten months at Fennell's studio on the east side of Seattle. "Locking ourselves in a tiny space with a batch of songs that are so different from our previous material was surprisingly easy and fun," Fennell says. They called the diminutive studio the Pool House, because, well, it's a pool house, with a swimming spot that is anything but luxurious. "We have yet to swim in the pool because it looks like the pool from Harry and the Henderson's after Harry takes a bath in it." Here in Fennell's hometown, they created a genre-bending sound that embarks on an aural adventure and weaves a narrative that ties it all together. "The first EP depicts a frantic, insecure, sexually hungry, jealous, truly masculine man," Fennell says. "It’s upbeat, dark, fun (at times), and catchy. The second EP involves more of the sexy, confident, and calm side of giving and receiving love. It might not always be realistic or helpful, but it’s sincere and powerful. The third EP is a mix between the two, it has moments of confidence, pride, and vulnerability."

Some songs were recorded just after their last record Not Quite Yours was released in 2012, while others reflected the personal changes that Fennell and Stonelake were going through. "Relationships are probably the biggest inspiration for our music," Fennell says. "People are f**ing crazy and as unpredictable as they are predictable! I love that."

With its slow-jam swing, epic keyboard surges and more-than-slightly sensual lyrics, "Cure" could be a fit for Skinamax. "It was definitely influenced by the likes of Prince and Madonna," Fennell says, "I love how they blend church and sex. I would be lying if I said I wasn’t trying to ruffle anyone’s feathers a little." The mid-tempo anthem "Drop Everything" skews a decade later to the VH1 era, as Fennell's voice floats atop a thumping heartbeat kick drum. It's a tale of heartbreak and the urge to save someone as Fennell croons, “What would you do if you weren’t afraid?” Fennell says it's a piece of fiction, but "there’s an undertone of misguided confidence throughout it that I really identify with. It sounds like a mix between a 1990s love song and, well, a late 1990s love song."

Barcelona's sound is malleable. It has hooks and pop aesthetic, but digs deeper too. "We are attempting to DIY much of this project on our own and in so doing, we have a particular ethic and pride of doing things." With their self-driven reinvention crackling with energy Fennell says Barcelona has cultivated a newfound focus and a two-fold mission: "We want people to close their eyes and imagine themselves at prom…or we just want them to freak out and dance. "