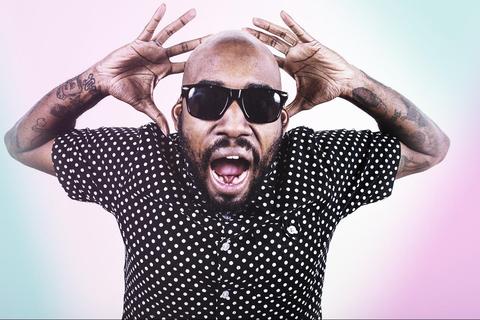 Clinton Sandifer, better known by stage name ShowYouSuck has raised the bar for live music performance and is considered a trailblazer for a new era of sound: alternative hip-hop. Having made appearances on MTV Suckerfree and joined Yelawolf on his national “Slumerican” Tour while still finding time to release three mix tape projects, including “Girls, Girls, Girls”(Produced By Stefan Ponce), and “Loose Slices”, it is clear that the rapper’s momentum is rapidly building.
Born on the west side of Chicago and raised by a single mother, his early encounters with the Smashing Pumpkins, Anthrax and Slayer left him a devoted rock fan for life. Lack of interest for alternative genres within his community did little to stop his drive: without access to instruments or others interested in starting a band, Show turned to rap.

While working at an Art Gallery & tattoo shop, the art school graduate found himself surrounded by like-minded people. Show felt inspired and welcomed to share his creations, unaware all the while that his fans were growing rapidly. ShowYouSuck’s point of no return occurred when performing at the sold out Reggie’s Rock Club release party of his mixtape “OMPP2”. The large crowd of concert goers moshed, crowd surfed, and reacted positively to the new genre Show had brought them.

ShowYouSuck will be releasing his full length project, Rad, sometime in 2014, a completely original piece from ShowYouSuck sure to impress his old & new fans.

www.showyousuck.com for more updates on Rad.