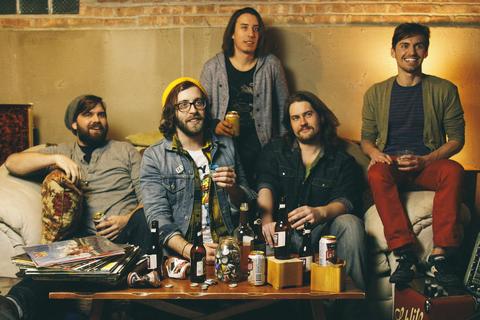 Has bemused cynicism and ennui ever been so fun? Archie Powell & the Exports have made a career of grafting prismatic power pop and sardonic, dark looks at the world outside into guileless songs with hooks galore. Archie Powell makes it look simple; he is incapable of writing an un-danceable tune, whether he turns a jaundiced eye on the culture of self-medication or whipping up a 3 minute heist story. Great Ideas in Action (out May 1, 2012) is the band’s third release of deceptively sophisticated songs. Blink and its killer catchy rock, blink twice and its social commentary that is sad, biting, funny but ultimately incredibly honest. Powell’s writing could easily come from someone twice his age but it never feels studied - his humanity just shines through and demolishes any doubts about where he stands.

It’s not hard to find stories in the news about the thousands of debt-ridden young people who are getting out of college and finding that there is nothing out there for them. While Archie claims he was an art student and knew what he was getting into, he’s written a pretty great protest song for his peers in “Job Fair”, singing “Hey baby, please can you cut some slack? You know I’ll settle up tomorrow if you got my back, I’ve been running out of luck cuz it’s about who you know, and all my resumes are fake and I don’t know where to go.” Some of the subjects of Powell’s songs are swimming in elicit pills - he gives bald depictions but from an obviously empathetic viewpoint. Meantime, keyboards are swirling and unique musical arrangements are charging forward and listeners are carried away but song craft that echoes Elvis Costello pumped with the energy of early Replacements.

The album was produced, engineered and mixed by Justin Perkins (formerly of Yesterday’s Kids, The Obsoletes and Screeching Weasel) at Howl Street Studios and The Mystery Room in Milwaukee during the Fall of 2011, it is set for release on May 1, 2012. The band recorded 14 songs before paring it down to the essential 11 including the title track, which Powell says is a Calvin & Hobbes reference (anyone who can describe the strip in question is entitled to free admission to Exports shows for life.)

Archie Powell is the son of a violin prodigy who played in the Chicago Symphany Orchestra before landing as a permanent member of Milwaukee’s orchestra. He started playing guitar at 11 and writing “awful” songs at around 15. Immediately following college, he and keyboardist Ryan started the Exports, bassist Adam joined after they recorded their first EP and they rounded out the permanent line-up with drummer RJ. The band’s first recorded effort was a digital freebie called the Loose Change EP that expanded their audience to a national level. It was followed by Skip Work, their debut full length, which drew praise from Boston Phoenix, Powerpopaholic, Radio Free Chicago and My Old Kentucky Blog among others.

The band began touring nationally in support of Skip Work, leaving a trail of empty bottles, broken hearts and hilarious tour videos in their wake. Great Ideas in Action is a group effort but as the songwriter and frontman of the band, it’s inevitable that it be a strong reflection on Powell. “I guess the duality between a pop rock aesthetic and the darker lyrical content kind of speaks to how I carry myself socially. I’m a pretty upbeat individual if you give me a quick once-over, but there are a few poor souls out there who have clearance cards to the super classified bad parts of my brain. They exist, you just gotta dig deeper, I guess.”