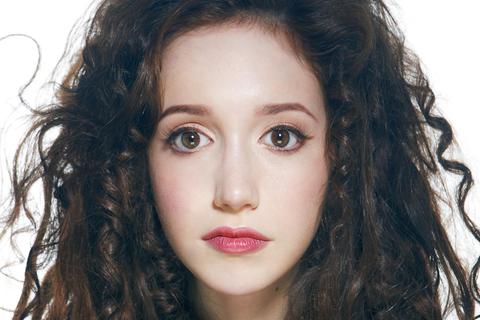 The songs on Bonzie’s debut full-length album, Rift Into The Secret of Things, brim with unbridled intensity and fiery alt-rock spirit. Bonzie — Chicagoan Nina Ferraro — isn’t a traditional confessional singer-songwriter. She’s more of an observer and commentator who expresses herself with unwavering honesty, and delivers her lyrics with powerful abandon. It’s partly for this reason that Ferraro has chosen to release her songs under the moniker Bonzie — an image and word she’s long associated with her creative output.

“When you release music under your own name there’s this assumption that the songs are straight from the diary and very personal,” she explains. “I've never felt that way about my music. In fact, sometimes I think it's the opposite. The songs are more about concepts that are interesting for me to dive into. There’s a distance that having a moniker entails that just feels more natural to me.”

Self-released by Ferraro on iTunes in August, Rift Into The Secret of Things has earned the 18-year-old much critical praise, including comparisons to such celebrated indie artists as Cat Power’s Chan Marshall (Spin) and Neutral Milk Hotel’s Jeff Mangum (Pepsi Pulse). Vogue enthused: “Her self-harmonizing is masterful” while calling out her “talent for moving seamlessly between gentle folk-inspired verses and edgier rock-n-roll riffs.” Interview magazine remarked: “Layering waves of strings, electronic hiccups, spiky guitar, and unexpected instrumental breaks upon a foundation of gentle coffeehouse folk, Rift beams with confidence.”

That confidence has enabled Ferraro to hold her own while teaming up with veteran producer and engineer Steve Albini (Nirvana, Pixies, PJ Harvey) to record a dynamic, somewhat unsettling new track entitled “How Do You Find Yourself, Love?” at Albini’s Electrical Audio studio. Ferraro first discovered Albini’s work when she heard Slint’s 1987 album Tweez, which he recorded. “Nothing I had ever heard sounded that way,” she says. “It was so emotional and raw, but at the same time, still polished.” Albini introduced Ferraro to guitarist Jeff Parker and percussionist Dan Bitney (both members of Chicago post-rock band Tortoise), who play on “How Do You Find Yourself, Love?”, along with Iron and Wine bassist Matt Lux (Ferraro opened for Iron and Wine in Los Angeles in June) and drummer James McAlister (Sufjan Stevens).

“How Do You Find Yourself, Love?” is just one of several songs that Ferraro has written for a new album she plans to record soon. “I got inspired by working with the Tortoise guys and seeing how they approach music,” she says. “I think there are a few ways to do it, one is very language-oriented. Another is more abstract, more impulsive and physical. I've been getting increasingly more interested in the latter.”

Ferraro’s work pushes boundaries, something she credits to discovering such iconoclastic alternative albums like PJ Harvey’s Dry, Slint’s Spiderland, Elliott Smith’s Roman Candle, The Pixies’ Surfer Rosa, Bright Eyes’ Lifted, Jim O’Rourke’s Eureka, Björk’s Medúlla, and Daniel Johnston’s Hi, How Are You. ”It made me realize that there are no rules in music,” she says. “I stopped second-guessing myself and just went with what I felt was right. I figured out that if I thought about other people while writing songs, I would be doing myself a horrible disservice.”

Even as a kid growing up in Wisconsin (she moved to the Chicago area a few years ago), Ferraro has felt strongly about separating herself from people’s expectations and predispositions. When she began writing and playing her songs at age 9, she would tell people they were covers of songs by other artists, rather than admit they were her compositions. “I knew that if I presented them like, ‘I wrote this, this is my song,’ there would be a certain amount of bias coming from the person I was playing it for,” she explains. “It would become more about me and my relationship with the listener, which felt so wrong because songwriting for me was never an egocentric pursuit. I wasn’t looking for anything in return. The benefit was simply creating something and releasing the song into the atmosphere, so to speak.”

When Ferraro was 12, she began performing regularly in her hometown. “The first time I sang in front of a crowd, I only did it because I wanted to perform a song I had written,” she explains. Now she is not only is a fixture on Chicago’s club circuit, performing at Schubas, the Bottom Lounge, and the House of Blues, Ferraro has also played at The Knitting Factory, Pianos, and Rockwood Music Hall in New York, the famed Bluebird Café in Nashville, and Hotel Café and Bardot in Los Angeles. She is going on tour with Ivan and Alyosha in November of 2013.

“With the band, I've been able to strike a really good balance between getting what I want for each song sonically and visually making it exciting,” Ferraro says. “It’s different every time we play, because of the nature of the musicians I play with and how I play, myself. It’s different every time, but it's always fun. I hope that comes across.”