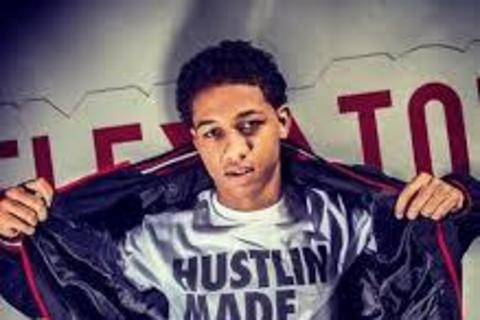 In 2012, Chicago received the auspicious title of being the nation’s murder capital, the majority involving the escalating homicides involving youth. For rapper Lil Bibby,that’s everyday life. The 19 year old rap phenom has witnessed much of that, and as he embarks on his journey to rap superstardom, his rhymes are documenting his life and what he sees every step of the way. Recording songs with friends, his tracks quickly were made into ringtones as they were sent from person to person. As their popularity spread far and wide and Bibby decided decided to take it up a notch and recorded three songs. One of the songs was “Kill Shit,” where Bibby flanked by crew member Lil Herb erupts on his threatening verse with a haunting crescendo. The track was turned into a lo-fi video and uploaded to YouTube (currently clocking in at over 4.2 million views). It reached the attention of Drake, who added a clip to his Instagram of him rapping along to the song. “We started gaining a lot of attention after that,” says Bibby.

In November of last year,Bibby dropped his solo critically acclaimed Free$Crack mix tape, a 17 track adventure into the streets of “Chiraq,” hosted by MMG’s DJ Scream.The mix tape showcased his burgeoning talent, as Bibby was described by XXL Magazine as having “a voice beyond his years.” The project was as honest as it was aggressive, and Bibby was propelled to the forefront of rappers on the rise. In the current rap landscape,few make it their mission to be a raconteur of sorts for their surroundings. At 19 years old, Lil Bibby is one of Chicago’s mouthpieces and aims to make his message universal. “I want to paint the real picture of Chicago,” he expresses.“A lot of people go off what they see on TV or hear in rap, and I don’t think rappers really tell that story fluently. I want to be the one to tell it like it is.”