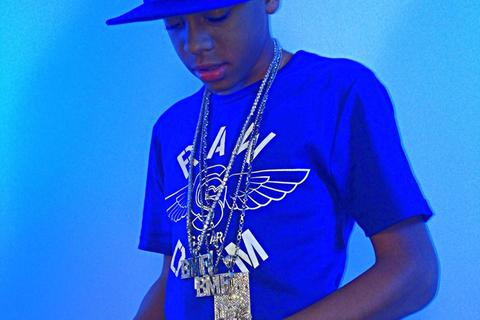 Listen to With My Team

“Mouse, the 14 year old rapper hailing from Chicago, seems like a fairly normal kid, with sports trophies scattered about his home, he describes riding motorcycles and four-wheelers as his hobbies. As he speaks, he shies away from the camera and stands alongside his mom for a portion of the clip. The teen also references his father, who was incarcerated early in his life, was still involved in raising him, according to Mouse. It’s when he starts rapping (and cursing) explicitly about women, guns, money, etc. that the child-like veneer washes away and his mannish ways appear.

“Right now, we have a blurred line between reality and age-appropriate lies when it comes to music, and Mouse serves as an example of one of those youngsters who paid the price of admission. By the age of 13, Mouse and other co-owners had an imprint by the name of Hella Bandz.” (See full write up from the Smoking Section here.)

Mouse’s buzz really started skyrocketing when his song “Get Smoked” (now at 4 million views) gained national attention after Lil Wayne remixed the song (listen here) and put it on his Dedication 4 mixtape. This led to rumors of Mouse being signed to YMCMB, which had some truth to it, but talks ceased and HellaBandz decided to keep things fully independent.

Just the news of Lil Wayne endorsing Lil Mouse then led to the a somewhat polarizing debate about the violent attitude and actions of children in Chicago as exhibited in the comment section of Miss Info’s article. The Chicago Sun-Times’ Mary Mitchell also wrote an article about the “moral bankruptcy” of parents and children in Chicago and Mouse was the main course (read article here). Lil Mouse was recently featured on Worldstarhihop.com’s harsh documentary “The Field; ” the flick depicts a very tough scenario, as the camera crew reports from the streets that are the main source of inspiration for the music created by these extremely young artists.

Lil Mouse is currently getting ready for the first major release of his career. The album “Michael Mouse Mayers” is set to drop this Spring. The album will feature appearances by Young Scooter and Lil Durk among many others