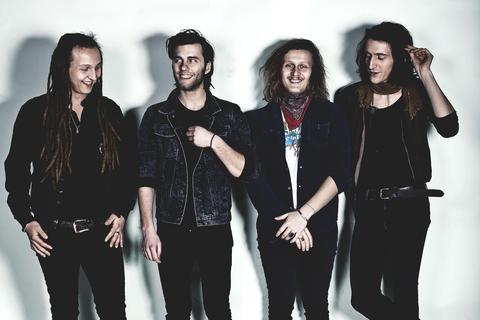 Okta Logue's first inception occurred in winter, 2007. The original band formed as Zaphire Oktalogue. Benno Herz and Philip Meloi first began jamming with brother Robert Herz in their rehearsing room in Darmstadt and recorded their first demo on Berlin-based independent record label Nasoni Records. While the band was officially a trio at this time, Nicolai Hildebrandt played some synthesizer parts on this first self-titled LP. Shortly thereafter, Nicolai Hildebrandt officially joined the band. Zaphire Oktalogue thus was renamed to "Okta Logue" now being a quartet. In winter, 2009, the band began writing their first official album “Ballads of a Burden“, which was again released on Nasoni Records. When in 2011, the band got signed to their current label Columbia / Sony Music, Ballads of a Burden was re-released on a larger scale. Their second and current album Tales of Transit City was released on Columbia / Sony Music on May 25, 2013 which was very well received among critics and brought further international attention to the band which lead to an international video premiere of “Transit“ on Noisey.

Since their foundation, Okta Logue has played numerous concerts all over Europe and due to the positive international reception of their releases and live performances, Okta Logue was recently invited to play support for well-known acts like Portugal. The Man and Neil Young & Crazy Horse on their European dates in 2013.On October 1st, their current album Tales of Transit City was released on New York based label The End Records for the US market. Alongside of the release in the USA, the band will play their first US tour in October wich will include appearances at this years CMJ in New York and the Culture Collide Festival in Los Angeles.