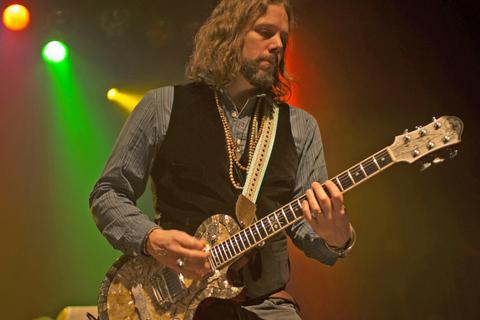 On the eve of the release of his third solo album, Rich Robinson, best known as the guitarist, songwriter, and founder of The Black Crowes, stands ready to complete the solo artist evolution that he began ten years earlier. The Ceaseless Sight, due out on June 3, 2014, is an album that represents the full maturation of Rich as a songwriter, a vocalist, and a solo artist.

Robinson was born in 1969 and formed the The Black Crowes with his older brother Chris in Atlanta in the 1980’s. At the age of 17, Robinson began writing the music for the songs that would land on the band’s 1990 debut album, Shake Your Money Maker, which sold 7 million copies. Over the next 10 years, Rich’s songwriting evolved into the musical engine that powered the band to sales of more than 25 million albums. Before taking a hiatus in 2001, the Crowes catalog included classics like The Southern Harmony and Musical Companion, Amorica, By Your Side, and Live at the Greek: Excess All Areas, a double album that captured the teaming of Jimmy Page and The Black Crowes for performances of Led Zeppelin, Crowes and blues and rock standards.

The Crowes went on hiatus in 2001 and in 2004 Rich began his solo journey with the release of his first album, Paper. The record was largely an extension of Rich’s musicianship as a Black Crowe showcasing his stellar and under-rated guitar playing and, for the first time, Rich took on the role of lyricist and lead vocalist. Paste Magazine: “Rich Robinson brings back not only roots-rock accessibility, but the complexity and originality that transformed the Black Crowes into a band that mattered. Paper is filled with beautiful melodies and harmonies, creative guitar work, fitting instrumentation and, most of all, excellent songwriting.”

It would be seven years before his second solo album, Through A Crooked Sun, and an accompanying EP, Llama Blues, were released as the Crowes reunited in 2005 and were actively recording and touring until their second hiatus in 2010. Crooked Sun, a far more personal album than his first, was a collection of 12 songs that expressed the increasing spiritual and political awareness that Rich’s life had taken. Recorded in Woodstock in 2011, the album featured Joe Magistro, Steve Molitz and guest performances by Warren Haynes, Larry Campbell, Karl Berger, John Lindberg, and John Medeski. PopMatters: “A solo artist worth taking seriously...It’s why this is such a significant solo album—even at their most melodic, the Crowes are simply too brash and energetic to ever be this delicate. By stepping out of the Crowes’ comfort zone, Robinson proves that he’s more than a gifted instrumentalist. Robinson has developed a writing style that is indeed reminiscent of the Crowes but also encompasses levels of emotional intricacy that the Crowes, for all their power, are sometimes incapable of reaching.”

A worldwide Black Crowes tour kept Robinson busy in 2013, but he found the time to return to Woodstock to record The Ceaseless Sight. The album finds Robinson stepping solidly into his own as a solo artist as he adds confident vocalist and lyricist to his accomplished musical resume. The Ceaseless Sight will be released early in 2014 and the Rich Robinson Band will tour through the year in support of its release.