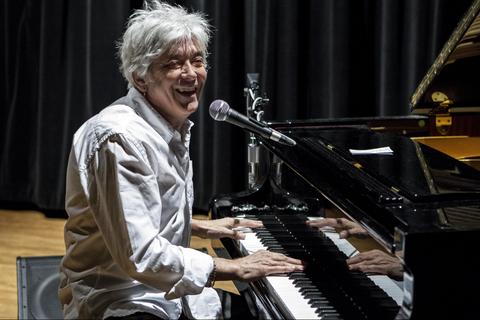 Ian 'Mac' McLagan
Ian McLagan is a genuine, dyed-in-the-wool rock’n’roller. In fact, his smiling visage — he was, after all, a member of the Small Faces and the Faces— would serve as an ideal illustration in the proverbial Dictionary of What Is Truly Cool.
The man known to his many mates and even more fans and admirers as ‘Mac’ is the sort who shrugs off such puffery. And then he just carries on creating splendid and genuine rock’n’roll with his Bump Band as well as musically aid and abet a marquee line-up of truly blue ribbon talent that he has toured and/or recorded with: The Rolling Stones, Bonnie Raitt, Bob Dylan, Ronnie Wood, Rod Stewart, Bruce Springsteen, Taj Mahal, John Hiatt, David Lindley, Paul Westerberg, Billy Bragg and Patty Griffin, to name some of the notables that McLagan has worked with over his five decade career.
He has also etched his distinctive musical talents onto the playlist of rock’n’roll history co-writing such Faces hits as Cindy Incidentally, You’re So Rude and Three Button Hand Me Down. His Wurlitzer electric piano is heard on everything from Stay With Me by the Faces to the smash hit Miss You by The Rolling Stones, and Mac’s trademark Hammond B-3 organ is featured on the Small Faces classic Itchycoo Park and Rod Stewart’s Maggie May and You Wear It Well.
McLagan entered the music game in Swinging London in the mid-1960s, and you can read all about it in his vivid and delightful memoir, All The Rage, a book that The Express hailed as “One of the best music books in years.” He ascended from the Top of the Pops with Small Faces to the pinnacle of rock with the Faces when Rod Stewart and Ron Wood joined the band. The rollicking Faces ruled 1970s album radio and sales charts as well as the stadiums, arenas and festivals around the world, leaving countless satisfied fans, many wild tales and more than a few quivering hotel managers in their wake. Whether McLagan is singing, writing and playing his own music or as the go-to guy for a session or tour, he has been and remains the quintessence of rock’n’roll.
Since he cut his debut solo album, Troublemaker, in 1979 — with two Rolling Stones (Keith Richards and Ron Wood) and a Beatle (Ringo Starr) among the players — McLagan has been making music in his own right that carries on the British rock tradition that he helped establish with the Small Faces and Faces on the albums Bump In The Night (1980), Best Of British (2000) andRise & Shine! (2004). “It’s all raw, up front, in your face, rollicking greasy good-time music done by a master,” says All Music Guide of Rise & Shine!
In 2006, he released a touching tribute to his old bandmate, Spiritual Boy: An Appreciation of Ronnie Lane, acclaimed by the Dallas Observer as “a warm and fitting salute to one of rock’s sadly unsung master songwriters and a must-have disc.” Spiritual Boy has garnered chart success in Mojoand leaves a trail of glowing reviews in Rolling Stone, No Depression, Uncut, and Goldmine.
Those not fortunate to catch McLagan & the Bump Band on tour or, when home, in their weekly residency at Austin’s Lucky Lounge can enjoy their magic on the CD Bump Live, which All Music Guide hailed as “the first real rock & roll record to be released in 2006.”
Awarded the prestigious Ivor Novello Award in 1996 for his outstanding contributions to British music and inducted into the Texas Music Hall of Fame in 2004, McLagan is beloved by musicians and music lovers alike. He produced the Faces four CD boxed set, Five guys walk into a bar… for Rhino Records, and received a rare honor on April 6th, 2006, when it was proclaimed Ian ‘Mac‘McLagan Day in Austin Texas. But rather than rest on his laurels, Ian McLagan continues to do what he has always done best: rock’n’roll.
Ian ‘Mac’ McLagan and Glyn Johns, his old pal from Small Faces and Faces days, met at Sphere Studios in London to mix and master Ian McLagan’s beautiful and emotionally raw CD, Never Say Never, which was released on the 2:59 Records label in 2008. The self produced and directed album features McLagan’s award winning Bump Band: Scrappy Jud Newcomb, Don Harvey and Mark Andes, and includes all original songs written by one of the best-loved musicians of our time. Patty Griffin graces Never Say Never with her soulful vocals and she and the Tosca Strings can be heard on the final track, the heart wrenching When The Crying Is Over. McLagan recorded and produced Never Say Never at The Doghouse Studio in Manor, Texas, and recorded Where Angels Hide on the Steinway in The Edythe Bates Old Chapel at The International Festival-Institute in Round Top, Texas.
2013 marked the release of Ian McLagan & the Bump Band's Live at the Lucky Lounge. There are 14 tracks engineered by Darwin Smith and feature Ian McLagan, piano, organ & vocals; ‘Scrappy’ Jud Newcomb, guitar & vocals; Jon Notarthomas, bass & vocals; and Conrad Choucroun, drums & vocals (If ever in Austin you should catch them live at the Lucky Lounge. They play from 6 - 8pm every Thursday they're in town. Check the GIGS section for dates. Until then give a listen to what you're missing!
2014 will see the release of their studio album United States on Yep Roc Records. Mac produced and directed the album's ten tracks. Engineered by Darwin Smith at The Doghouse, except for the Tosca Strings on the last track, Mac, Scrappy, Jon & Conrad are the only musicians and vocalists on the record. United States was mixed by Glyn Johns.