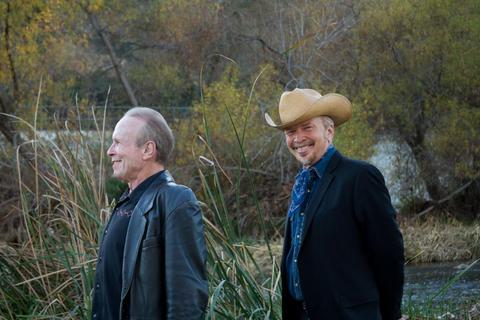 Listen to All By Myself

It took a near-death experience to reunite Dave Alvin and Phil Alvin, the California brothers at the heart of "roots heroes" (Rolling Stone) The Blasters.

"Phil died and was brought back to life over in Spain," Dave says of his brother's 2012 health scare. "That was a real wakeup call to me. We hadn't made a full album together since 1985, but as you get older, you realize you're not immortal and you've only got so much time."

It only made sense, then, that for their first record together in three decades, the Alvin brothers would go back to where it all started and pay tribute to one of their original shared musical heroes: Big Bill Broonzy.

"I first remember seeing Big Bill's picture on an album cover that I bought when I was 14 or 15," says Phil. "I didn't really know who he was and came home and played it and was overwhelmed by him."

"We're brothers, we argue sometimes," Dave adds with a laugh, "but one thing we never argue about is Big Bill Broonzy. I remember the day Phil brought the record home, it was one of those childhood memories like you're graduating grammar school or stealing your first Playboy. For me, Big Bill is in that elite company of Leadbelly, Woody Guthrie, Robert Johnson, people like that."

Like the Alvins', Broonzy's career lasted more than 30 years and spanned several stylistic incarnations, all of which the brothers sought to capture on 'Common Ground: Dave Alvin & Phil Alvin Play and Sing the Songs of Big Bill Broonzy.' "He played both country blues and ragtime blues picking, and then in the late 1930's and 40's he was one of the inventors of the Chicago blues sound," explains Dave. "And then in the late 40's until his death, he was the guy that brought blues and American folk music to Europe. He was the first guy to go over there and blaze the trail."

That the Alvin brothers feel such a kinship with a trailblazer like Broonzy is little surprise. The Blasters emerged to international fame in the early 1980's, blending American roots and blues with searing punk energy to critical acclaim. Rolling Stone hailed their "bright, raw playing, terrific taste and...[Phil's] full-bodied vocals," while in the Village Voice, Robert Christgau wrote that Dave was "a major songwriter, one with John Fogerty's bead on the wound-tight good times of America's tough white underbelly." The band performed with everyone from X and Black Flag to The Cramps and Queen, and even gave early breaks to Los Lobos and Dwight Yoakam by inviting them on the road as openers. As AllMusic puts it, "it's practically impossible to imagine the roots rock scene of the '80s and onward existing without [The Blasters] as a roadmap."

The brothers went their separate ways in 1986, when Dave left the band to pursue a solo career. After decades apart musically, they reunited briefly to record songs for the 2013 soundtrack to "The Ghost Brothers of Darkland County," a musical written by Stephen King and John Mellencamp featuring performances by Elvis Costello, Taj Mahal, and Kris Kistofferson among others, and produced by T Bone Burnett. They also sang a duet on “What’s Up With Your Brother” for Dave’s last Yep Roc release ‘Eleven Eleven.’

"We rehearsed at David's house a few times for that," remembers Phil, "and that was a good step in bringing us back together."

Once inspiration struck for the Big Bill Broonzy project, all it took was a phone call from Dave, and Phil was onboard and ready to head into the studio for their first album together in three decades.

"We used this old Foley studio from the 30's that had been used for movie sound effects," says Dave, who shares vocal duties with his brother on the record. "We set up all in that one little room a la Sun or Chess and just recorded."

"It was easy," he continues. "I'm not as boisterous as I used to be. Like the title suggests, this is where we come together. It's square one. There was nothing to argue about outside of 'Am I playing the guitar part right?'" he laughs.

Rather than trying to recreate Broonzy's exact guitar parts and vocals note for note, though, the record honors his innovative spirit and musical adventurousness, blending chords and melodies from different songs and incorporating stylistic nods to other guitarists—everyone from Magic Sam to Bo Diddley—whose work bears Big Bill's unmistakable fingerprint.

That encyclopedic knowledge of American music, that expansive musical vocabulary and the fluency with which the Alvins slip in out and of genres and eras is what enables 'Common Ground' to triumph. Dave Alvin and Phil Alvin may have set out to honor the legacy of Big Bill Broonzy with this record, but in the process, they solidified their own as one of roots music's most exceptional duos.