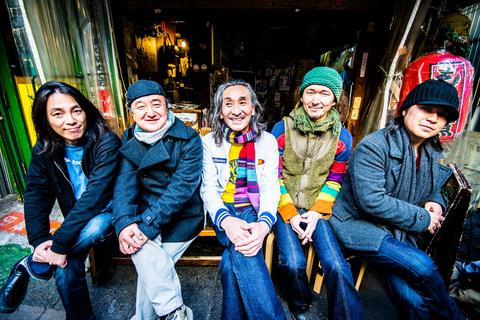 SENTIMENTAL CITY ROMANCE is a Japanese rock band that was formed in 1973. The group has released 12 studio albums, 2 live albums, 10 singles and numbers of compilations.

As a group, they have the longest life among all bands in Japan with more than a majority of the band members staying the same. Typical of the Japanese, they are very modest towards their achievement.

Originally, they were mainly influenced by the American country/southern rock music and some British music. But they soon found their original play style as well as their unique Japanese lyrics.

Beginning with an appearance for first time in front of the crowds at “The 3rd Haruichiban Music Festival” in Osaka this new teenager band impressed the audiences and other musicians with their highly skilled music performance and beautiful harmony. While the folk, blue and pop music were the main stream, their music was something very different.

The group released their self-titled debut album and single Uchiwamome in 1975 on CBS Sony Records. The album won the CBS Sony golden LP prize. Their second and third albums Holiday and City Magic were released over the following two years.

During their 10th anniversary the group released two albums Smiling and Dancing and two singles Smiling Face and Turning Point but this time on Polydor Records. Jeff “Skunk” Baxter (of Steely Dan and Doobie Brothers fame) joined their album Dancing.

Throughout the rest of the 80’s they released the albums Happy End, Relax (1984), Summer Days and numerous singles on Polydor. To celebrate their 20th anniversary the group released a live CD, video and laser disc from their performance at “MET Hall Ikebukuro” in Tokyo.