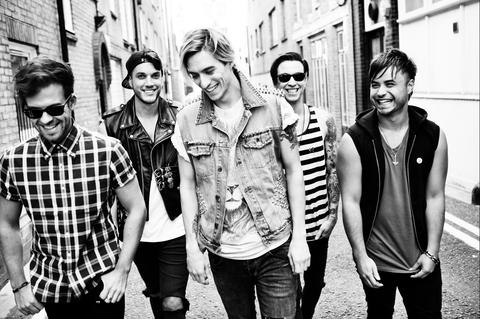 Strength comes from our bones – the knowledge that, deep down, nothing is impossible. 'Bones', the stunning new album from Young Guns, captures exactly that: it's a hymn to bravery and boldness, the defining statement so far from one of our finest bands.

“We've written something that I feel happy describing as 'brave',” says frontman Gustav Wood, “and it will challenge a lot of people's preconceptions about what sort of band we are. It's an ambitious record, and we have the ambition to match the sound.”

Written over a number of months everywhere from Thailand to Spain to a shed in the band's hometown of High Wycombe, 'Bones' (recorded at Karma Sound Studio in Bang Saray, Thailand and subsequently mastered to tape) marks Young Guns' transition from a band packed with potential to bonafide contenders for the title of Britain's best. It's a stirring album full of contradictions – it speaks of strength and vulnerability, friendship and loss, energetic youth and heavy-hearted experience – that proudly displays Wood, John Taylor (guitar), Fraser Taylor (guitar), Simon Mitchell (bass) and Ben Jolliffe (drums)'s skyscraping vision, and in some style.

“When you're writing an album you need to believe that what you're doing is the most important thing in the world,” continues Gustav. “And this feels like it is. It feels like we've achieved something.”

Having formed from the ashes of a variety of local bands, Young Guns' first release was the striking 'Mirrors' EP in June 2009. But it wasn't until debut album 'All Our Kings Are Dead', unveiled in July 2010, that they began to really show what they were capable of. Backed by a groundswell of popular support, the band hit magazine covers, headlined the HMV Forum in London, toured Australia and played the Main Stage at Reading and Leeds Festivals; in the backs of their minds, though, they knew they could do better.

And they were right.

Taken at face value, 'Bones' feels effortless, but the work that went into it – the long hours, the nudging back of immutable deadlines, the worry, the sheer grind that comes with a genuinely democratic writing process – mirrors the band's career to date. This is a story of victory by inches, not of instant boom (and inevitable, sad bust).

Young Guns backed themselves into a corner with their drive to comprehensively outdo 'All Our Kings...'. After a handful of fruitless writing sessions, Gustav, Fraser and John spent a night in the studio with a couple of bottles of vodka and the desire to write a song their heroes would be proud of; when morning eventually came, they had the skeleton of 'Dearly Departed', a song that, once they'd taken it to the rest of the band and let them work their magic, would sit as one of the keystones of 'Bones'. “Once we wrote that song, we knew we could really make a mark with this album,” says Wood.

The title track itself is another standout moment, a pure rock anthem in the most heroic sense.

“When you do something you know is good, that you know stands up... it's bliss. Elation. We worked so hard on this album, and there were times when the stress was horrendous. When I finished tracking the vocals for 'Bones' and we stood back and cranked it on the stereo at 4am, listening to what I knew would be a single that would do big things for us, that was overwhelming.”

From then on, the songs flowed: the title track, a howl of defiance; stunning opener 'I Was Born, I Have Lived, I Will Surely Die', a fearless statement of intent; lead single 'Learn My Lesson', a calling-card that's as dynamic as it is catchy.

“It feels like I want to just kick people's heads off,” smiles Gustav. “It sounds stupid but I just want to get out there and make a mark – it keeps me up at night, thinking about how much I want to do.”

Now, with 'Bones', Young Guns have started their second chapter. The underdogs have bared their teeth and shown what they're really capable of, but while a whole new audience is about to be introduced to the wonder of Young Guns, the band themselves aren't surprised how well the album turned out. They knew they could pull it off. They felt it in their bones.