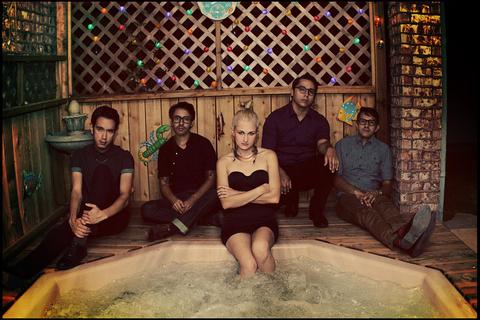 “Dreamy ’60's soundscapes… Like Amy Winehouse went on holiday with Vampire Weekend” is MTV Buzzworthy’s reflection on indie darlings The Royalty. Best described as "rock & soul," the band extracts its influences from the girl-groups of the Motown and Spector era, and the R&B crooners of the 1970s.

With a set of pipes as irresistible as her wink, The Royalty is fronted by singer Nicole Boudreau. Guitarist Jesus Apodaca, keyboardist Daniel Marin Jr., bassist Mike Hernandez, and drummer Joel Quintana complete the Texas five-piece.

Formed in the desert city of El Paso, sunny birthplace of renowned and defunct rock outfit At the Drive-In, The Royalty breathed life back into the border city’s indie music scene with a dance-ready live show loaded with meticulously crafted pop songs – products of the band’s self-diagnosed perfectionistic strivings.

The Royalty emptied its bank account to self-produce and release the band’s self-titled debut album in 2010, sneaking in to university music rooms to lay down vocals. A year later, Boudreau and the boys landed a contract with Chicago’s Victory records. With reverb pedals carefully packed, The Royalty temporarily relocated to the beaches of California’s Orange County in early 2012 to craft and complete songs for the group’s critically acclaimed follow-up record, LOVERS. The album, full of the band’s signature glossy foot-tappers now married with darker undertones, was released in May of that year.

The New York Times gushed that LOVERS is both “invigorating” and “fresh,” labeling it “one of (2012’s) most unexpected and enjoyable rock records.” The enthusiasm was echoed by other music outlets, with NPR dubbing the album “infectious,” and The Washington Post noting that “Miss Boudreau’s vocals were made for this sort of nostalgic music,” adding, “She’d probably do a killer version of ‘Rolling in the Deep’… When your own songs are this good, though, there’s no need to resort to cover tunes.”

The Royalty has toured across the U.S. and Canada in support of LOVERS. The band’s music has also set the mood for some of television’s most-watched programs on the channels of MTV, VH1, Bravo, The CW, and Showtime.