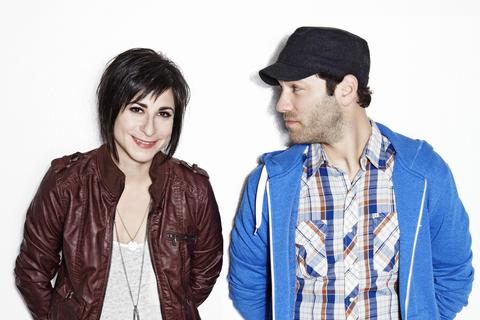 There's a rich history in rock of exes making beautiful music together. But what makes TeamMate's story particularly compelling is how insurmountable drummer Dani Buncher and singer-keyboardist Scott Simons' break up seemed. One day they were daydreaming about growing old together, and the next, Dani came out to her boyfriend. The two had been dating for a full decade.

In the four years since that gutting split, an extraordinary connection and a mutual love of music have helped them dismantle, then rebuild, their relationship. "If we couldn't be partners," explains Scott, "we were still going to be teammates." Getting there took work, as chronicled in their self-produced debut album (out in 2012 on Rostrum Records), an indie-pop memoir that charts the times and tides of their lives.

If TeamMate has an anthem, it would be first single "Sequel," a reflection on modern love that aches beneath shimmering synths. It is "the happiest break-up song ever," says Dani, "and literally says where we are as a couple."

The duo was all-but-fated to meet. Dani, attending West Virginia University, played the snare drum in the marching band, while Scott, an alum of the college, fronted a touring power-pop band based out of the same town. They were both young, Jewish aspiring musicians, and as such, were introduced to each other at parties so much that, says Dani, "We'd always pretend we were meeting for the first time." They soon started dating.

As Scott branched out as a solo musician, his music was often inspired or vetted by Dani, who did A&R for major labels after college. (It was she who encouraged him to record a wistful cover of Rihanna's "Umbrella.") After working for several years in Manhattan, she returned to her hometown of Pittsburgh, moved in with Scott there, and started an indie band of her own.

They shared a home for a year, until things began to unravel. When Dani finally came out, she felt a sense of relief, assuaged by Scott's unwavering support. "It wasn't easy. But I lost my father when I was 20," he says. "He was the most important person in my life. So as long as I have a choice to keep someone in my life, I'm going to."

After the split, Scott headed out to Los Angeles to test his mettle as a professional pop songwriter-producer. Instinctively, he asked Dani to help him relocate, and she joined him on that cross-country jaunt. They cultivated a platonic ideal while visiting oddities such as the dinosaurs from Pee-wee's Big Adventure, singing along to the radio, and camping in the desert. "The whole way was a celebration of our friendship," she says. Scott adds: "When she left to go back east, it was like, 'Wow, we're not going to be that close ever again. That was the end of a 10-year relationship.'"

Scott has prospered in Southern California. While making strides as a solo artist, he also landed gigs as a songwriter for major-label artists and as a keyboardist for touring acts. But a couple years after the move, Dani backed him up on drums for a gig in New York City—and everything just jelled from there. "I was like, 'That's it. This is the direction I want to go in. We need to make this a band project.'"

At heart, TeamMate is therapy. "Sometimes, I say stuff in songs that we'd never say in person," admits Scott. Despite his compositions' weighty themes, the melodies are surprisingly upbeat, inspired by Dani's drumming. Tracks like "Landline" pine after the early, mobile phone-less days of their relationship, while others such as "Velcro" explore the duo's undeniable bond, which they can finally joke about. TeamMate's unofficial motto: "Breaking up is hard to do."

"It all happened in an organic way," Scott marvels. "And we're so proud of where we are now."