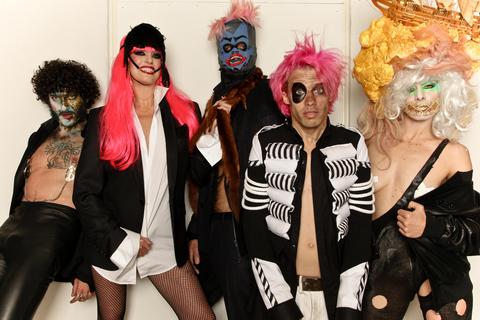 "You could say we are from Germany, Switzerland, USA, France, Mexico, Persia, Israel, New Zealand or Canada – But we sound like something else!" After month on a road-trip across europe, BONAPARTE - swiss vagabond Tobias Jundt‘s alter ego turned electro-punk collective - performed a first show in october of 2006 on pieces of trash found in the backstage area of now legendary bar25 in Berlin, Germany. after their first lo-fi album "TOO MUCH" (2008) and songs like „TOO MUCH“ and „ANTI ANTI“ became independent hits, the word spread like wildfire amongst europe‘s unemployed superhero community and the word "live-show" bore witness to a most sweaty, slippery and sexmerising renaissance.
In 2011, after having performed their second album "MY HORSE LIKES YOU" at some of the biggest european festivals such as "Rock Am Ring", "Hurricane/Southside", “Dour”, “Montreux”, “Exit”, „St. Gallen“ and "Roskilde", they released a kaleidoscopic portrait of their live-show, a feature film called "0110111 - QUANTUM PHYSICS & A HORSESHOE" (Staatsakt/Warner). They emerged from the party-capital‘s underground club-culture and developed into a wild rock’n’roll-trash-punk-troupe de force performing over 100 shows a year. while they are touring extensively around europe, russia and down under, BONAPARTE remain fully self-produced a.o. writing, recording, producing and mixing the music, creating artwork, designing stage-costumes, incorporating photographers and video-artists as members of the live-band on stage and releasing DVDs as well as most recently a 288-page photo-book entitled "THREE YEARS IN THE HEART OF BONAPARTE".
The 3th studio-album was recorded in an former east german coin factory in the heart of berlin. the strong-room served as a recording chamber for drums, the director's office was stuffed with analogue synthesizers and obscure gear. overlooking the watergate with its old boating docks, Tobias Jundt pored in another dose of his poetic madness and produced a concept album entitled "SORRY, WE'RE OPEN" - a sonic journey mixing the worlds of vintage machinery and lo-fi drum-sounds with electrified guitars and the glistening sweat of rock-n-roll.

all SXSW showcases 2013 will include the full live-band as well as the dancers and performers.

Press-Quotes
• "BONAPARTE are amongst the most exciting newcomers from Europe right now!" (C/O POP)

• "BONAPARTE, the band with the hottest and craziest live show on earth right now!" (BOYSNOIZE BLOG)

• “the freakshow aesthetic and deliberately dilettante delivery of BONAPARTE should not overshadow the fact, that Tobias Jundt is amongst the most exciting songwriters and pop-composers of our time.” (SPEX)

• “If Peter Pan and the lost boys would have founded a band, it would have definitely been BONAPARTE.” (SATT)

“I am not sure if there is more sweat or beer in my glass!“ (A FAN)