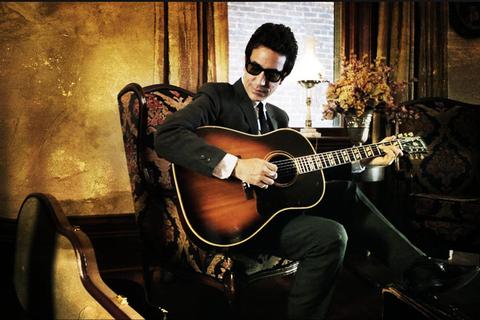 Listen to Right on Time

With a four star review in Rolling Stone, A.J. Croce’s Cage of Muses is a shining milestone on the circuitous road that the singer-songwriter has traveled - from his debut as a jazz influenced blues-based artist to his evolution into a pop music iconoclast. But at this juncture, A.J. is more focused on the present and the future than the past. And after a three-year stint living in Nashville, he has come home to California.

“Nashville has become a real center for all kinds of music,” A.J. says. “You’re more likely to run into Jack White or Robert Plant than Dolly Parton.” In Music City, a packed weekly schedule of co-writes sharpened his writing to a keen edge, but while tailoring songs for other artists was an invaluable experience, A.J. says that there was always a sense of compromise. Returning to California, his writing took an instant turn. “I began writing for myself again,” he confirms.

In the span of a 20 plus year career, A.J. has headlined festivals, concerts and major listening venues worldwide. He has been seen and heard on shows including Late Show with David Letterman, Austin City Limits, Good Morning America, E!, MTV and CNN, and has performed with a roster of artists that includes his idol Ray Charles, B.B. King, Carlos Santana, Rod Stewart, Aretha Franklin and Willie Nelson.
A loyal and appreciative audience and glowing press from Rolling Stone to the New York Times confirms the appeal of A.J’s genre-spanning music, with seven of his albums positioned in various charts including Top 40, College, AAA, Americana, and Jazz. An ivory-searing New Orleans piano style established an essential juju, but his exploratory pop gems revealed a spectrum of influences from art rock to Americana and beyond. Initially signed as a jazz artist, he recorded two well-regarded releases for Private Music/BMG Records and subsequently charted with an Americana roots release that expanded his audience exponentially.

With the support of BMG in 2003, he founded an independent label, Seedling Records, to represent his music and that of other artists. “Chess, Specialty, Sun: all the great rock and roll, R&B and many of the great country labels were indie,” he says. “I might not sell a couple of hundred thousand like I did on a major, but selling twenty thousand of something on your own terms not only feels better, but it pays better, too.”

An overview of Adrian James Croce’s life includes certain unequivocal facts: his father was the legendary singer-songwriter Jim Croce who perished in a tragic plane crash in 1973. Robbed of his vision from the ages of four to ten, he regained sight in his left eye. He later confronted another cataclysmic challenge with the loss of his voice, regained through rigorous retraining.

These days, with his increased facility on the guitar and the addition of a second guitarist, Michael Bizar, A.J. is performing some of his father’s songs in concert. “I’m blown away when I do play something of his, at the amazing loving reaction,” he marvels. “I play the opening finger riff to ‘Operator’ and immediately the audience is there.” And the music that influenced the father is an essential blueprint for the son: Leiber & Stoller, Woody Guthrie, Pink Anderson, Bessie Smith and Sam Cooke. “It didn’t come from the ether,” A.J. notes. “You may be writing something new, but it comes from something old.”

In his teen years, A.J. spent summer time months in London, where echoes of the recent past were audible touchstones to a golden legacy of British rock. “Yes, I appreciated the Rolling Stones,” he recalls. “But I got more into what influenced them.” Absorbing these indelible influences, A.J. added to the sounds with his string of pub gigs. He also identified with the next wave of British rock ¬– provocateurs like Elvis Costello, the Jam and the Clash –points of reference to be absorbed into his multi-hued artistic spectrum.

In the very near future, A.J. Croce anticipates a return to the recording studio with a close coterie of friends to craft a new record that he says is partially influenced by the soulful rhythms of the tambourine, and the sound of 11th chords. “You can’t control what you’re going to write,” he says. “I’m 75 percent there with what I’ve written for the next record, but I write all of the time. I’m not concerned about being able to complete a song – I’m more concerned about completing the right one.”

A dedicated family man, an adventurous artist and a confident creator; in this phase in his life and career, A.J. is focused less on expectations and more on instincts. And like the blues artists who influenced him, A.J. Croce continues to create compelling music with longevity, authenticity and truth.

“A.J. Croce has wisdom beyond his years. With his music, he represents his generation with a profound sense of honesty in his lyrics and quality in his delivery. The future of entertainment is safe in his hands!” - Willie Nelson

“One of the greatest young songwriters” – David Wild, Rolling Stone