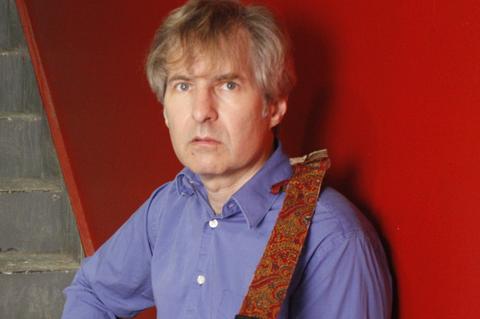 CHAPEL HILL, N.C. — “This record is the closest I’ve ever gotten to the sound I hear in my head in the middle of the night,” Chris Stamey says of his new Yep Roc Records release, Lovesick Blues, set for February 5, 2013 release available on CD and as a two-disc 45-RPM vinyl. “It’s always the quiet ones that sound the loudest in the dark.”

As a solo artist, producer, arranger, studio entrepreneur and founder of seminal indie combo the dB’s, the North Carolina-bred singer/songwriter/guitarist has built a beloved and influential catalog that’s earned him the devotion of a far-ranging fan base and won him enduring status as a godfather to the Southern alternative pop community.

Lovesick Blues is Stamey’s first full-length release since A Question of Temperature, his 2005 collaboration with Yo La Tengo. The new album follows on the heels of Falling Off the Sky, the long-awaited, much-acclaimed reunion album of the dB’s, as well as Stamey’s involvement as musical director and orchestrator for a series of all-star concert performances of Big Star’s classic Third album in New York, London, Austin and Carrboro, NC.

While his prior work has established Stamey as an incisive songwriter, compelling performer and innovative sonic architect, Lovesick Blues finds the artist staking out some new songwriting territory, with inspired results. Such vividly forthright new tunes as “Skin,” “London,” “Wintertime” and “I Wrote This Song for You” deliver bittersweet, personal lyrics and inventive acoustic arrangements that employ strings, woodwinds and vocal harmonies to evoke the songs’ emotional landscapes.

Those intimate numbers are balanced by more upbeat tunes like the vibrantly jangly "Astronomy" and the playful road-trip memoir "You n Me n XTC." Another highlight is the poignant late-night torch song "Occasional Shivers," which Stamey first recorded as the B side of a limited-edition Christmas single in 1986. The album's musical and thematic centerpiece is the seven-minute "Lovesick Blues," dedicated to the late North Carolina guitar great Sam Moss, and encompassing solitary late-night heartbreak, sweeping orchestral drama and redemptive uplift.

The resulting album is a landmark for Stamey, balancing his new songs’ unfiltered emotional honesty with the effortless melodic craft that’s always been a hallmark of his work.

“I wanted to make a record that could make you feel less alone, like someone else has been there before you,” Stamey explains. “I was thinking about records like The Ballad of Todd Rundgren and Nick Drake’s Bryter Layter and Robert Wyatt’s “At Last I Am Free” and Richard Thompson’s Small Town Romance. Those are all records that were a source of comfort to me at various points in my life. They were records that seemed to speak one-on-one, records that weren’t trying to sell you anything. It’s that old saw about the blues being sad yet making you feel better. None of the songs on Lovesick Blues are traditional three-chord blues, but some of them speak that same emotional language.”

Like the recent dB’s album, Lovesick Blues was birthed at Modern Recording, the small yet technologically advanced Chapel Hill studio that Stamey has operated for the past two decades, where he’s produced recordings by the likes of Whiskeytown, Alejandro Escovedo, Flat Duo Jets, Le Tigre and Tift Merritt. The Lovesick Blues sessions found him handing the production reins to fellow North Carolina musician/producer Jeff Crawford, who’s also a solo artist and a member of the band the Old Ceremony. The album also draws upon the talents of the Fellow Travellers, a core group of musically literate young players from the Chapel Hill area who participated in the Big Star concerts, as well as members of the North Carolina Symphony Orchestra.

“I wrote most of the songs during one two-week period,” Stamey explains, adding, “I’d wake up early and go into a room where the light was good and write a song every day. Then I played them for Jeff, and we picked the ones that seemed best for the way we wanted to record. On most of the songs, we first did live takes, with me playing guitar and singing at the same time. Then we’d orchestrate them, adding the string and wind and vocal colors that we thought were needed to underline the meaning of the songs. In the process, I added a couple of older songs, ‘London’ and ‘Occasional Shivers,’ which seemed to make sense for this album.”

Some unexpected but helpful input arrived in the form of XTC’s Andy Partridge, who entered the picture after Stamey invited him to make a vocal cameo on “You n Me n XTC.” Partridge declined the offer, but ended up getting involved in the project anyway, offering some key production, arranging and mixing suggestions via transatlantic email.

“He didn’t like the repetitive chords of ‘You n Me n XTC,’” Stamey admits. “It was only after I played him the other songs that he started getting really into it. He became a long-distance safety net for us; Jeff and I would send him mp3s of songs in progress and he’d write back with very detailed, specific suggestions. It was like having an exceptionally intuitive Ouija board, and it really enlivened the process.”

Growing up in Winston-Salem, Stamey made his earliest ventures into recording with a series of homemade avant-garde experiments with future Let’s Active leader Mitch Easter during grade school, then studied formal composition at UNC-Chapel Hill before starting the obscure but ultimately influential Sneakers. Stamey launched his own pioneering indie label, Car Records, in 1976, and the following year moved to New York, where he played bass with Alex Chilton before forming the dB’s.

The dB’s recorded a pair of albums, 1981’s Stands for Decibels and 1982’s Repercussion, that remain indie-pop landmarks. Stamey then departed for a solo career, turning out a series of smart, musically adventurous gems including It’s A Wonderful Life, Instant Excitement, It’s Alright, Fireworks, Travels in the South and the holiday-themed Christmas Time. His catalog also includes a pair of duo albums with Peter Holsapple, Mavericks and Here and Now, as well as the experimental instrumental departure The Robust Beauty of Improper Linear Models in Decision Making, a collaboration with guitarist Kirk Ross, and A Question of Temperature, on which he was backed by longtime friends (and early production clients) Yo La Tengo.

Having recently wrapped up a round of rocking live shows with the reunited dB’s, and energized by the understated intensity of his new solo effort, Stamey is planning on bringing Lovesick Blues to the live stage with an acoustic chamber-pop format, touring on his own and calling on local string players and harmony singers to play the notated arrangements.

By embodying the qualities that have always been at the heart of his work, while introducing some vital new elements to the mix, Lovesick Blues demonstrates that, after a lifetime of music-making, Chris Stamey’s flame still burns as brightly as ever.

“I’ve been very lucky to have been around a lot of great, creative musicians in my life,” he states, adding, “I still learn things all the time from them, and I know that I still have a long way to go. But I think this is the closest I’ve gotten on record to expressing what is unique about what I do, the part that’s been there all along.”