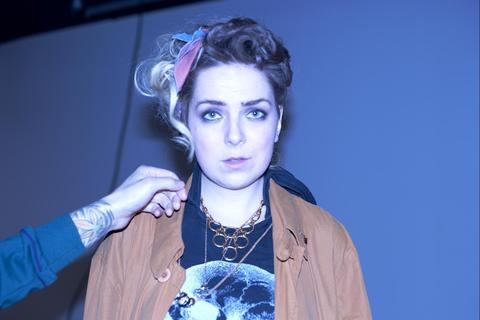 Listen to Don't Leave It To Me

Mozart's Sister is the captivating solo project of Montreal's Caila Thompson-Hannant. Staggering between beautiful, bursting synth-filled pop melodies and the complicated, often harsh consequences of reality in her lyrics, she unites these elements together in an explosion of vibrant emotion and hypnotizing intensity.

This sense of unexpected fluidity and change flows throughout Dear Fear, her self-recorded and self-released debut EP of 2011, dancing between the rhapsody and destructive components of sex, love and relationships. Labeled "bedroom paranoia," Dear Fear explores the wild, untamed energy manifested within the confines of one's own space and the inner power developed to break down these walls. In "Don't Leave It To Me," Thompson-Hannant belts, "I wrote this song after I met you," a statement that Pitchfork praises, "if it resulted in a pop gem like this - you're left feeling grateful for that chance encounter."

Influenced by mainstream R & B and Prince, '90s trip-hop and Björk, and the current shift in electronic music, Thompson-Hannant incorporates this sense of collage into her work, constantly transforming her voice and sound against a gorgeous, direct aesthetic with an uncontainable passion and sense of expression. Mixed in with the sassy, riveting confidence of defining groups like TLC and Salt-N-Pepa, Mozart's Sister is also both influenced by and a part of the groundbreaking modern Montreal electronic music scene, characterized with the same vigor and charisma as such female contemporaries she's shared the stage with, Grimes and tUnE-yArDs.

Look for an upcoming release from Mozart's Sister in 2013, one that leaves behind the bedroom paranoia and grasps control with a glittering, entirely arresting radiance.