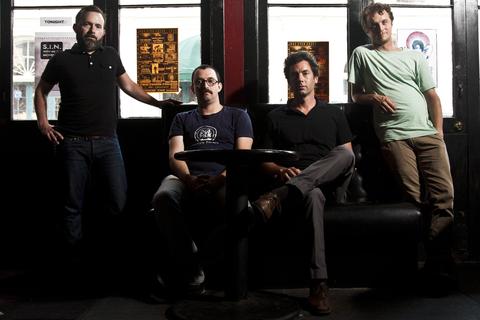 Forget that they have a Fiddle and Accordion up front. Lost Bayou Ramblers' 2012 "Mammoth Waltz" broke ground by taking Cajun music and turning it into something accessible and danceable to all. Adding in special guests including DR. JOHN, SCARLETT JOHANSSON, Violent Femme's GORDON GANO, members of GIVERS, NORA ARNEZEDER only strengthened the eclectic mix of instrumentation and sound.

2012/2013 also found LBR linked to the artistic breakthrough and Oscar Nominated film Beasts of the Southern Wild, arising from their contribution to the song "The Bathtub", an interpretation of the " Balfa Waltz".

With five albums under their belt—along with a 2007 Grammy nomination for Best Zydeco or Cajun Music Album for Live: À la Blue Moon—the group, featuring brothers Andre & Louis Michot, began making strides to expanding their sound on 2008’s Vermillionaire, which they recorded with Austin-based producer Chris “Frenchie” Smith, leader of Sixteen Deluxe and Young Heart Attack, adding that band’s bassist/keyboardist, Pauly Deathwish. With Cavan Carruth moving increasingly into playing electric guitar, the Lost Bayou Ramblers have taken the next step with the latest album on their own Bayou Perdu label, Mammoth Waltz, produced by Korey Richey [GIVERS] at the famed Dockside Studios in Maurice, LA.