Hurray for the Riff Raff 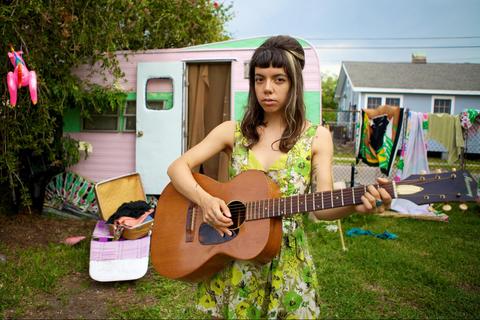 Listen to Born To Win (Part One)

Hurray for the Riff Raff is Alynda lee Segarra, a 25 year old Puerto Rican from the Bronx. After leaving home at an early age to travel the country, she eventually settled in New Orleans where she began to perform and record with a revolving cast of musicians. She released two records (2008’s It Don’t Mean I Don’t Love You and 2010’s Young Blood Blues) mostly consisting of delicate folk and country songs. In 2011, the UK record label Loose Music (Felice Brothers, Dawes, Deer Tick), released Hurray for the Riff Raff, an album that collected the best songs from those records. The Times of London named Hurray for the Riff Raff one of the Top Ten Albums of 2011. Phil Alexander, the Editor-in-Chief of Mojo Magazine, raved that they “have immense potential and seductive power” and named them second best band at SXSW 2011.

Back in the States, Alynda and her longtime gunslinger on fiddle, Yosi Perlstein, met up with a young honky-tonk band called the Tumbleweeds, just as Alynda began to expand her musical palette to include rock n roll, pop, and soul. In the tradition of Bob Dylan with Band and Neil Young with Crazy Horse, Alynda and Yosi recruited the Tumbleweeds to be their touring band, drastically altering the sound of Hurray for the Riff Raff.

Look Out Mama is the result of almost two years of Alynda and the Tumbleweeds criss-crossing the USA, playing over 100 shows in small bars and clubs. Recorded in Nashville by producer Andrija Tokic (Alabama Shakes), Look Out Mama is an exploration of classic American music as interpreted by Alynda lee Segarra. From the Swamp Pop of “Little Black Star” to the Classic Country of “Look Out Mama”, to the Psychedelia of “Ode to John and Yoko” and even the Surf-Rock of “Lake of Fire”, Look Out Mama covers a wide array of musical ground, with every song unified by Alynda’s soulful vocals and expert songwriting.