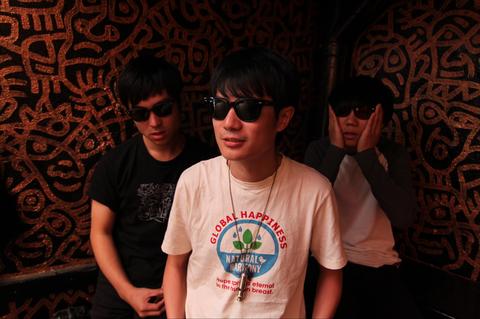 Listen to You Can Listen, You Can Talk

Carsick Cars, described as “a nervy, consonant euphoria” by Jon Pareles from New York Times, consists of Zhang Shou Wang on vocals, guitar and loops, He Fan on bass and Monkey on drums. Their first CD was recorded in the spring of 2007 and was produced by legendary P.K.14 front man Yang Haisong. Their sound, influenced by the drone of Velvet Underground, Suicide, and Sonic Youth and the formal structures of Steve Reich and Glenn Branca, is a combination of brilliantly textured roar and hard open chords that are used to explore and tear apart their beautifully crafted songs. Their expert song writing has gained the group a large fan base among Beijing musicians and the position as one of the most frequently covered artists in China. As befits what is one of the most admired Chinese bands in the world, Carsick Cars has performed widely in China and abroad. In addition to packing clubs in every major city in China, Carsick Cars also toured Europe with Sonic Youth, who described Carsick Cars as their favourite band in China.