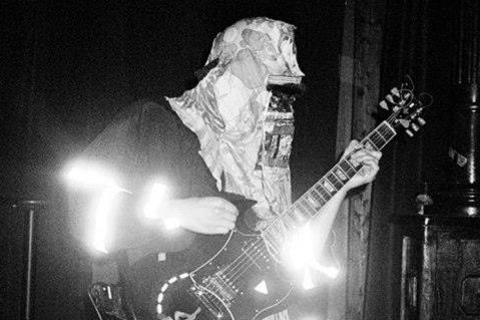 ASSACRE is a one man fantasy/progressive metal performance project from Austin, Texas. A native of Brooklyn, New York, artist and musician Ben Aqua created ASSACRE in 2003 as an outlet for his fascinations with extreme and experimental music and performance art. After releasing a demo EP in 2004 entitled “Impossibly Silent”, ASSACRE began making a name for himself throughout Texas with his wild, confrontational, and unpredictable performances in DIY art spaces and guerrilla parking garage shows. He is often extravagantly costumed in concert and in photographs.

ASSACRE ambitiously toured the USA in the summer of 2005 in support of his first full-length release, “Fantastic Illusions Worth Dying For” (The Awthum Empire, 2005). The album features 8 tracks of fantasy, death, and thrash metal mixed with bizarre, abstract sound collages, displaying a wide array of musical influences - from Death to Klaus Nomi to Merzbow to Sun Ra.

ASSACRE has shared stages with Lightning Bolt, The Locust, Dan Deacon, The Sword, The Gossip, Japanther, Best Fwends, Paper rad, At All Cost, Horse The Band and Jad Fair. His festival performances include SXSW in 2005 in Austin, Texas, Homo A-Go-Go Festival in 2006 in Olympia, Washington, and Scenery Festival in 2010 in Groningen, Netherlands.