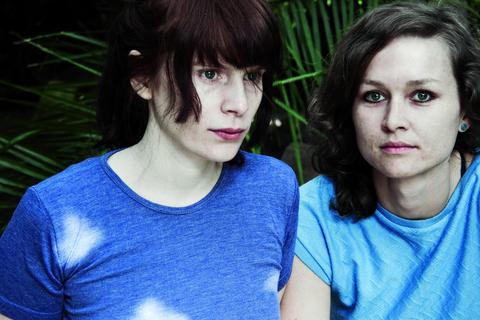 Listen to My Heart Is On Desire

plaided is veronika eberhart and julia mitterbauer who are having playdates in vienna (austria) since 2009.
they change instruments, invite guests on stage, play shows in different countries and different line ups, released a 7“ (people lying around in dirt every day) on fettkakao and their first album, called PLAYDATE in spring 2012!

theirstory:
julia and veronika got to know each other while organizing the ladyfest vienna back in 2005. All the motivated people in that DIY- community, the workshops, concerts and discussions inspired them to start a band of their own. Together with Alena Pfoser they formed their first band Ilsebill, while at the same time all three of them were wrapped up in grounded theory to write their master thesis.
As none of them had played the drums or an e-guitar before, their approach to music was and still is intuitive, direct and self-taught, they improved their skills simply by playing, laughing and crying. Following a great time of exciting rehearsals and concerts, Andi Dvorak asked them to release a 7inch record on his label fettkakao, which ilsebill happily agreed to do.
Not long after the release Alena headed to St. Petersburg to start her scientific career.

Back in Vienna Julia and Veronika started their new project PLAIDED by playing a concert at the frauenbandenfest, a feminist concert evening which takes place in Vienna regularly to support local, all-female, start-up bands and offers an open stage and a well-meaning audience.
They continued experimenting with different instruments and invited guests such as ana threat, steffi sourial, sushi, andi dvorak, natali and a thousand fuegos on stage.
They still love DIY, riot grrrls, punk, cats and big hearts.

Next to their band they have a lot of other stuff on the side, while Julia creates beautiful things out of wood and drawings of birds, Veronika helps to organize the girls rock camp in Wr. Neustadt, takes pictures of houses and faces, animates, and slowly starts her solo project tirana, which already published a song on the fettkakao Sampler (2011).