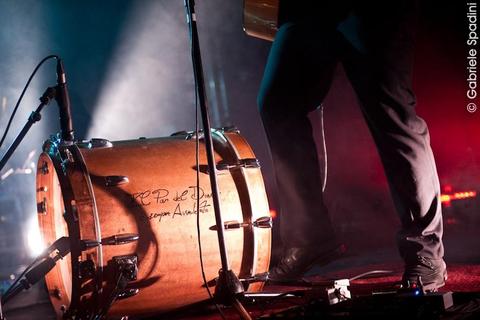 Il Pan Del Diavolo is a folk'n'roll duo formed by Pietro Alessandro Alosi (guitar, kick and vocals) and Gianluca Bartolo (guitar and vocals).
The group was born in Palermo in 2006 and began playing live with energetic and very intense performances. In 2008 they won the Sicilian stages of the national Italiawave Festival competition, playing also at Ypsigrock and sharing the stage with Gogol Bordello at Pollino Festival.

In September 2008 their first official release, "Il Pan Del Diavolo" Ep. In 2009, they toured for almost 100 shows, including performances at the MiAmi Festival, Rock Island Festival, Mason Musique and Rock and Rodes.

On 15 January 2010 they released the debut LP "Sono All'Osso", out on one of the most important indie labels all over Italy, La Tempesta dischi; the record has been warmly received by critics (5* on RollingStone Italy and LP of the month for various other magazines), and made it into the final selection at the most important Italian award for songwriters, the Premio Tenco, as "Best First Act".
In 2012 critics and audiences excited for their second LP "Piombo Polvere e Carbone",mixed by JD Foster and played with the international musicians Antonio Gramentieri e Diego Sapignoli
from the band Sacri Cuori.
Characteristic of the band is the very powerfull live set.