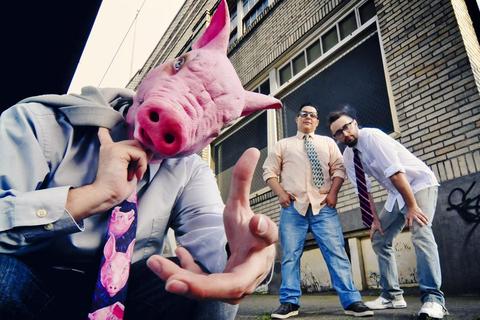 "The Best Bar Band in America”

The Chicharones have toured the world, solo and with live bands, and perfected their sound, with over a decade spent in airplanes and in crowded tour vans, fighting to make something of themselves for the people they left behind. From Sleep's magic tricks and quick change routines, to Martinez's beer balancing and hi-kicking Elvis dance moves, The Chicharones have become legends for their unique sound and one-of-a-kind live show. Spin called The Chicharones "The Best Bar Band in America". Using humor and harmony, they’ve created something entirely new, pushing the boundaries of what hip hop sounds like. Expect 5-part harmonies, speed raps, a razor tight band, costume changes, syncopated dance moves, stage magic, standup comedy and the joyful interplay of veteran performers Sleep and Josh Martinez as they constantly raise the bar on what music can and should be.

“A Thousand Miles and One Step Away”

Swine Flew is the culmination of years of musical experimentation, uniting the content driven storytelling raps of the Boss Hogs EP, the epic joy and sorrow of When Pigs Fly, with the Surf-Rock musicality of Swine Country, to create an album for all seasons. The Chicharones are looking to infect the whole world with their particular brand of greasy hip-hop magic. While laying themselves bare, they take their lyrical content and musicality to new heights. With influences from the Beach Boys to the Beastie Boys, the Beatles to the Beatnuts, The Chicharones have created a musical masterpiece that speaks to all generations. This is musically mature music that engages the emotions, showcases the growth of the songwriters, but doesn’t stray too far from the unique joie-de-vive the Chicharones have always brought you. This is the music for the adult you’ve become, and the kid that lives in your heart.