Lions In The Street 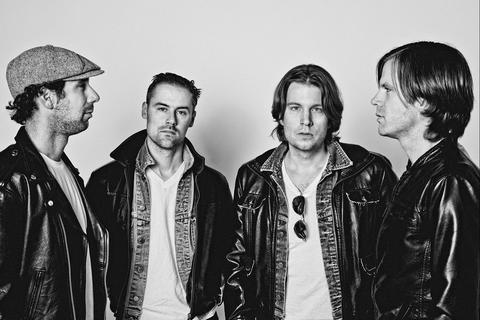 Listen to All For Your Love

Rock ‘n’ roll, direct and with no qualifiers, is Lions In The Street’s business. What sets the Vancouver band apart from the defanged mainstream is that their modern denim-and-leather heaviness is anchored in the raucousness of the Rolling Stones and the gravitas of Peter Green’s Fleetwood Mac. Over the past decade, Chris Kinnon (lead guitar, vocals), Sean Casey (guitars), Enzo Figliuzzi (bass) and Jeff Kinnon (drums, vocals) have become masters of coarse rock and strident roll, both of which the group’s new On The Lam EP has in spades (February 19, Beverly Martel Records).

“On The Lam is really our first release on a proper label, which is kind of sad since that should have happened in 2005-2006,” says Chris. “We made a great debut record for TVT Records, and everyone was happy with what we’d accomplished in the studio, but before it was released everything fell apart.”

This cluster-cuss situation intensified when TVT hit financial hard times and clung stubbornly to the band’s rights while refusing to let them finish the record. Legal hassles followed, sucking up money and preventing them from signing with other interested labels, which set Lions in the Street on a course towards independence: the band’s priority became touring, crafting new music, and working menial and blue-collar day jobs to pay down their label debts.

Jump to 2010, when a self-released debut album emerged. Those that found the grassroots effort heard greatness brewing. JamBase observed, “This is rock with a direct line back to the nasty blues, jump tunes, and country boogie that birthed the whole damn genre. Untamed, direct, and bristling with hairy masculinity, Lions in the Street play rock like the cause it is.”

Layoffs, car accidents, legal bills and more bad luck over the past few years prevented the band from promoting their independent album properly, but they kept at it behind the scenes, sharpening and modernizing their sound. The Big Takeover’s Michael Toland says of the band: “There’s nothing self-consciously retro about Lions in the Street—this is a groove and a sound that’s completely organic, played with fire and conviction in the manner of young men who have no choice but to rock it like they walk it.” Dirty Impound elaborates, “This group oozes classic rock attitude and style but evades nostalgia with songs that leap with urgency and timeless solidity.”

2013 finally finds the band back on a good road, their eyes set firmly on bluer horizons, and exploring the heavier dimensions of their sound with producer Shawn Cole and mixer Rick Parker (Black Rebel Motorcycle Club, Von Bondies, Beachwood Sparks). One big plus is Lions in the Street’s new relationship with L.A.-based independent label Beverly Martel Records, owned by music business veteran Sandy Roberton of Worlds End Management. Roberton’s dedication to independence and artistic integrity is a perfect fit for Lions In The Street, and they are a fitting new act for a man who worked Chess Record’s catalog in the UK in the 60s, managed the great John Martyn, and produced the hugely influential Steeleye Span. Beverly Martel’s sister label IAMSOUND has been very successful identifying emerging talent (Lord Huron, Florence and the Machine, Fool’s Gold), and one expects on the basis of On the Lam that Lions In The Street are another in this line.

“We kept at it, sometimes foolishly, and this new EP is the culmination of all our experience,” says Chris. “Now we want to do it for the right reasons, and I don’t know if we could have said that in 2006. You develop idols like anybody else, and just because your goals aren’t a BMW and a mansion, that doesn’t mean your intentions are completely noble. Everyone who makes music wants recognition of some sort and a good life, but at every point we’ve been prevented from compromising our integrity to get these things. So there’s a certain authenticity we can’t really take credit for [laughs]—it’s a humility that’s been forced on us.”

The challenges Lions In The Street have persevered through have forged a tough, dedicated survivor’s strength—this is a band that’s been at it for a spell but whose hard road has only intensified their edge and music.

“We’ve always been a little ornery,” says Chris. “I grew up listening to The Clash, so maybe that’s why. I dig The Faces, but it all starts from a darker, heavier place.”