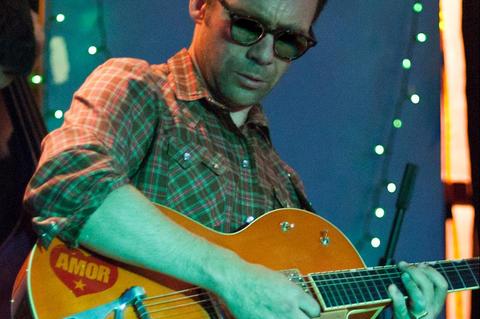 Naïm Amor is a french born, Tucson Arizona based musician and composer.

Shortly after moving to Tucson from Paris in 1997, Naïm formed the “experimental avant pop” AMOR BELHOM DUO with drummer Thomas Belhom. They put out two albums on Carrot Top Records.

Naïm then began to collaborate and record with Joey Burns and John Convertino of Calexico. Together, they put out the album “Tete A Tete” under the name of ABBC (Amor, Belhom, Burns, Convertino).

Soon after Naïm enlisted the producing skills of John Parish for his first album, “Mistake Love” in 2004.

In 2005 he recorded “Sanguine”, an album produced by Joey Burns of Calexico and briefly released on Universal/Atmosphérique in France, now on german label Le Pop for Europe.

Naïm’s most recent album “Dansons” was released in May 2012 on British label Vacilando 68 and in Japan through Sweet Dreams Press.