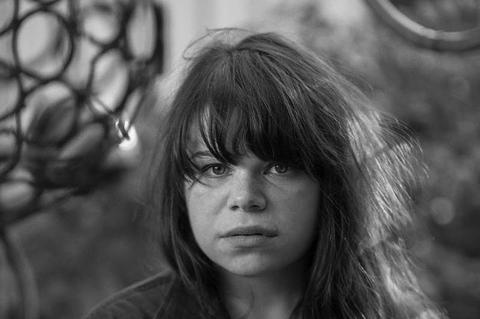 Listen to Never Going Back

Kid Face, the third full-length album from Samantha Crain (Ramseur Records, February 19, 2013), is a revelatory song cycle as expansive as the wide-open spaces of the 26-year-old artist’s native Oklahoma, and as intimate as a conspiratorial whisper. Recorded and mixed in just eight days in the San Francisco studio of producer John Vanderslice (the Mountain Goats, Spoon), this wildly original album stands as the definitive statement thus far from an uncommonly insightful, fearlessly honest young singer/songwriter.

The most apparent thematic thread running through the album is restlessness. The first-person narrators of these 11 songs are in constant motion, as they feel the tug of the far horizon or the need to escape from their present circumstances, ruminating about what may lie ahead and what they’re leaving behind—roots, family, a lover.

Crain introduces the notion of covering ground in the opening song, the propulsive, fiddle-accented “Never Going Back,” and continues it on the following “Taught to Lie,” a minor-key confessional whose nomadic protagonist has “tried to move around, spent a while in Oregon/Then back to Oklahoma, ran around and had some fun.” Subsequently, this compulsive urge to keep moving pulses through the gossamer traditional folk of “Paint” (“I’m trying not to disappear/Into the shadows…”), the hushed piano ballad “The Pattern Has Changed” (“Changing my clothes though they’re the only thing I own now/Coming off the road though it’s the only way I know how…”), the incandescent title song (“Wrong light, driving on a low hung night/The border is just in sight, I can hear it hum…”) and the dark, smoldering “Sand Paintings,” which bears more than a trace of Crain’s “most constant” inspiration, Neil Young (“It’s the lightning hit the tower, all my westward driving hours/Please know my name…”). In the closing “We’ve Been Found,” which turns on the preternatural purity of Crain’s voice, a prodigal daughter makes her return. “I flew home before Christmas,” she sings. “She was gone, I know she misses/All of us, what if I had stayed?”

When asked about the impulse behind this prevailing theme, Crain explains, “The common element of these songs is me; I’m the narrator of all of them. This is the first record of mine that’s completely autobiographical. It’s the most personal record I’ve written, a musical journal of my experiences—things that have happened to me as I traveled and my thoughts about specific situations. In the past, I resisted writing about myself because I was ashamed of how normal I was.” She punctuates this admission with a quick laugh. “So I wrote about the people I met in my travels. But having done this for a few years, I’ve gained confidence, and this time I wanted to tap into the feeling of getting older and knowing more about myself. I think that makes the new record more relatable, more blue-collar.”

Instantly accessible by way of the ecstatic melodic lifts embedded in each song, which enable Crain to explore the full range of her powerful but achingly vulnerable voice, Kid Face gradually reveals its depth and nuance over repeated listenings. Crisp, vivid images and liquid internal rhymes betray Crain’s painterly attention to texture and the minutest detail. No song overstays its welcome, as she exhibits a rarefied economy of expression, an open-ended willingness to leave certain things unsaid, to resist the urge to dissect the mysteries of life.

As it turns out, Crain came to her gift obliquely. “It may seem odd, but wanting to travel preceded my wanting to get good at songwriting and performing,” she confesses. “In fact, I started playing music in order to travel. Living in a small town in Oklahoma, there wasn’t much going on, and I got itchy, so I started going out on the road and playing everywhere that would have me. At that time, a few years ago, the coffeehouse circuit was more welcoming than it is now; usually, all I had to do to get a show was to send a demo to the booker.” Initially hitting the road as a duo with her roommate at the time, Crain began to satisfy her desperate need for raw material, and her experiences “traveling and meeting people and getting to see different places” began to feed and animate her songwriting, about which she was becoming increasingly passionate. In a sense, then, Crain was following in the footsteps of an earlier Oklahoma-born troubadour, Woody Guthrie.

A Choctaw Indian, Crain grew up in the small town of Shawnee listening to her father’s Dylan and Grateful Dead records, dabbling in painting (a pursuit she took seriously enough to later land a gallery exhibition in Oklahoma City) and trying her hand at writing short stories. When she became intrigued by the notion of writing songs, Crain reworked a series of stories she’d written while taking creative writing classes at Oklahoma Baptist University into the songs she then recorded for her self-released EP, The Confiscation: A Musical Novella. The quality of the material and the bold way in which she delivered it inspired North Carolina-based Ramseur to sign the fledgling artist to a deal; the indie label gave the EP a proper release in 2007. The Confiscation revealed the then-21-year-old newcomer “as a promising young storyteller with fealty to ragged, country-driven indie-pop and an alluring dark streak,” wrote The New York Times’ Jon Caramanica.

Crain made Songs in the Night (2009), her debut album—and her first proper recording—with the Midnight Shivers, a band she’d formed not long beforehand. It got the attention of Rolling Stone reviewer Will Hermes, who wrote, “Her voice is gorgeously odd—all fulsome, shape-shifting vowels that do indeed billow like fog.” She followed it a year later with the stripped-down You (Understood) (2010), recorded in a converted barn in Wichita, exposing the primal extreme of her sensibility. “Like a prairie-bred, meat-and-potatoes Joanna Newsom, Crain’s vocals are quivering, emotive and visceral,” noted Liz Stinson in Paste.

If these albums demonstrate Crain’s skills as an observer of the nuances of character and human interaction, this new work shows she possesses the bravery to probe her own psyche as her journey turns inward.

Counterbalancing Crain’s wanderlust is a rootedness that exerts just as strong a pull. “I’ve lived in other places these last few years, but never for long,” she says. “Coming back home brings me perspective and focus.” These leavening aspects are as integral to the impact of her songs as the experiences that inspired her to write them.

Ultimately, the movement in the songs of Kid Face is purposeful, as Crain searches for herself and her place in the universe. Think of Kid Face as a key early chapter in what promises to be an extended, enthralling personal saga. Woody would have been proud