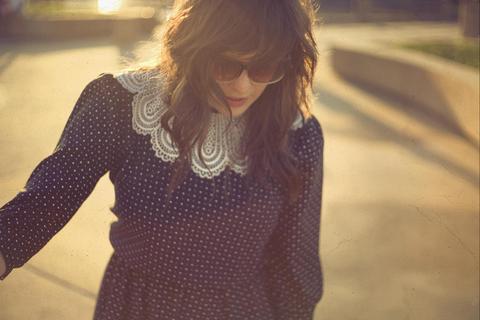 Listen to Before You Go

OK SWEETHEART is the recording project of singer-songwriter, Erin Austin. Reminiscent of all the good things from mid-century pop, her well crafted simplicity pulls influence from classics such as Harry Nilsson, The Beatles, The Zombies and Randy Newman. OK SWEETHEART's uniquely pop sound is the result of an eclectic collaboration with members of Midlake, Lucius, The Polyphonic Spree, and Via Audio.

With an ear to late 60's early 70's pop, Austin penned a battery of over sixty songs in early 2008. That summer, co-producers Rob Gungor and McKenzie Smith (Midlake) had begun experimenting with sounds and instrumentation, thoughtfully developing arrangements at Midlake's studio. By October 2008, Austin had arrived in Denton and completed work on her first single "You Let Me Down", winner of the John Lennon Songwriting Award for Pop as well as a Lennon Award. In October of 2009, OK SWEETHEART made the top 5 in Austin City Limit's "The Sound and The Jury" competition. Officially showcasing at SXSW 2010 presented the band to industry folks garnering interest from labels, booking agents, managements firms and licensing companies.

OK SWEETHEART finished recording their debut record "Home" in September of 2010 which was independently released in April 2011. In May, OK SWEETHEART quickly gained exposure from having the title track featured on major network television shows 90120 and One Tree Hill. Throughout the summer and fall of 2011, OK SWEETHEART continuously toured the States and Canada playing anywhere from solo shows in living rooms to headlining showcases at major festivals with up to 10 other musicians joining in on performances. Major network shows like Royal Pains, Revenge, MTV's Awkward and major motion pictures like "Contraband" with Mark Walhberg featured OK SWEETHEART songs. In the fall of 2011, Austin was deemed, by Lucky Magazine, as one of the "Most Fashionable Girls in Indie Music."

In January of 2012, OK SWEETHEART took root in Las Vegas as a resident artist at The Royal Resort writing and performing all original new songs with a variety of Las Vegas scenesters including members of Most Thieves, Same Sex Mary and Rusty Maples. OK SWEETHEART continued to tour throughout the States and Europe through the fall of 2012.

OK SWEETHEART will be officially showcasing at SXSW 2013 and touring colleges while recording a new record set to be out in 2014.