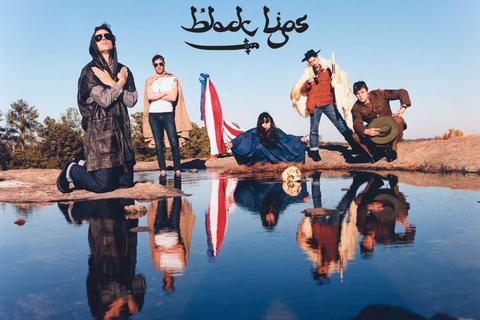 Arabia Mountain, the sixth studio album and fourth Vice Records release by the Black Lips, finds the hell-raising Atlanta quartet digging deep into the roots of their exposed-nerve sound and simultaneously exploring surprising new possibilities in their music – or as one of their new songs puts it, “lookin’ in a new direction.” Singer-guitarist Cole Alexander explains, “We tried to do what we do best, and keep it raw, but we also opened up to working with a producer and experimenting with new sounds. We tried to keep doing what we’re doing, while expanding and growing at the same time.”

The Lips – Alexander, singer-bassist Jared Swilley, singer-guitarist Ian St. Pé, and singer-drummer Joe Bradley – had never collaborated with a producer before embarking on their current album. This time, however, the band set out to work with one of the producers on their short list: Mark Ronson, the English producer known for both his sharply-honed solo albums Version and Record Collection and his production work for the likes of Sean Paul, Nas, Adele, Kaiser Chiefs, Duran Duran, Lily Allen, and most notably U.K. soul-pop diva Amy Winehouse’s international breakthrough Back to Black.

“When that came out, we thought, for mainstream pop, this has a cool retro sensibility that we appreciate,” Cole says. “We knew he had the potential to get an older sound. We’re not purists who just want to sound old, but there are certain recording techniques that were used a long time ago that sound really good, and can be used in today’s context. We felt he understood that.”

While the Lips have by no means turned their backs on the storming punk and garage-rock that is the core of their confrontational style, working with Ronson allowed them to work at a more relaxed pace and refine their song-oriented side. “We’ve gone in and done a whole album in a week,” Cole says. “After our last album, we plateaued with that approach. We decided to spend a lot of time and actually work on this record. It ended up taking a year and a half, which is the longest we’ve ever spent. We had some good pop songs in the past, but they got buried in the swampy production. Beefing up the production made a difference. It was a little outside the box for us, and a little outside Mark’s box as well.”

Although the majority of Arabia Mountain was cut with Ronson at MetroSonic Recording Studios in Brooklyn, two songs, “Go Out and Get It” and “Bicentennial Man,” were recorded by Lockett Pundt of Deerhunter in Atlanta. Cole says, “We did those two songs on four-track cassette, and that’s old-school Black Lips – that’s how we first started recording. I just really like cassette sounds. It’s really compact and punchy.”

Arabia Mountain careens through a typically wild catalog of subject matter: touring the Dali Museum, high (“Modern Art”), backwards masking and double suicide (“Mad Dog”), the superhero as molestation victim (“Spidey’s Curse”), the joys and perils of uncooked food (“Raw Meat”), the saga of the Atlanta Braves’ team mascot (“Noc-A-Homa”). “We went further with this record than we ever did in the past,” Cole says. “If you listen to the lyrics to some songs, they’re a little deeper, I think.”

While straight-ahead revved-up rock is not in short supply, the new collection pushes the band’s stylistic boundaries. “Family Tree” found its musical inspiration in a Bolivian folk tune heard on a compilation produced by the eclectic Atlanta label Dust-to-Digital. “Dumpster Dive” is a full-on plunge into Rolling Stones-style country. And “Don’t Mess My Baby” uses tribal drumming to convert a song that began life as Bobby Fuller-styled pop-rockabilly into something approaching South African township jive.