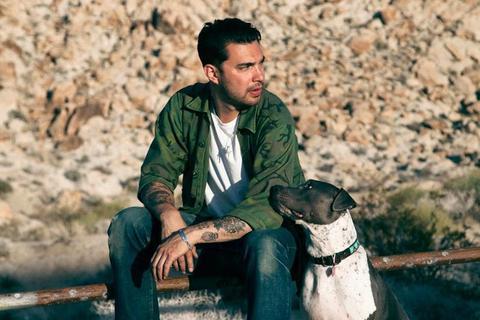 When Hanni El Khatib started out, he was just a skater kid playing the world’s worst guitar and singing by himself.  Inspired by a long line of determined do-it-for-themselves musicians winding back through punk and psychedelia to rock ‘n’ roll and early r&b and finally the first scratchy years of the blues, he’d record song after bare-bones song—in between day jobs and night life—just because he had things he wanted to sing about. Then in 2010 from a chance meeting, up-and-coming indie label Innovative Leisure recognized that there was something huge hiding in those little songs. And so El Khatib made his official full-power soul ‘n’ rock ‘n’ roll debut (on vinyl too) in 2010.

Soon his music would overtake him completely. By the time his first album Will The Guns Come Out was released in 2011, he clawed out a space of his own musically and left his job as creative director at streetwear label HUF as well as his hometown of San Francisco to become part-owner of (and in-house Art Director) Innovative Leisure in Los Angeles, California. It had been the kind of year where anything that could happen would happen.

In 2012, however, Hanni El Khatib showed up to record his second album with just the clothes on his back—no guitar, no fancy almost-finished demos, and only about three weeks time to get from start to finish. While on tour, he'd met Dan Auerbach in a bar in Paris and after some whiskey got involved, they decided to partner up in Auerbach’s studio in Nashville. The idea was to erase everything he’d become comfortable with and to make an album out of only raw instinct and inspiration.

The result is Head In The Dirt, produced by Auerbach, in which El Khatib takes a lucky eleven songs and makes the entire history of rebel music something all his own. He’s got cut-to-the-bone rhythm ‘n’ blues (“Save Me”) and overcranked Stooges-style stompers (“Family”). He’s got bottomless Black Sabbath riff-outs (the back half of “Pay No Mind”) and dub-a-delic garageland rockers (“Nobody Move”) that call up the spirits of the Clash and the Equals both. His “Low” is just one Andre 3000 remix away from a club anthem, “Penny” is his stuck-in-your-head pop hit and “Sinking In The Sand” is his smash-your-head freak-out. The plan that first day in Nashville might have been to make something out of nothing—but by the end of Head In The Dirt, you’ll realize that Hanni El Khatib actually made something out of everything.