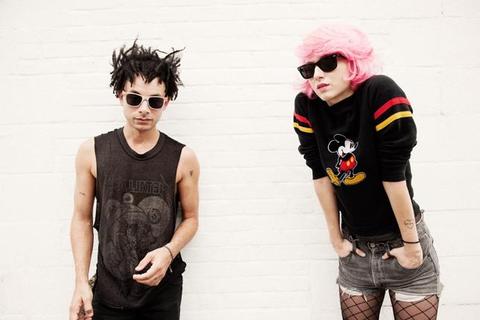 Brooklyn's Hunters music is charged with wild energy -- led by
singers/guitarists Derek Watson and Isabel Almeida. Their guitar melodies and vocals, witch switch rapidly between singing and talking, have been said to be reminiscent of Sonic Youth's Kim Gordon and Thurston Moore. In the past year they have toured with bands like The Kills, Jeff The Brotherhood
and A Place To Bury Strangers. Somewhere along the way they got with Nick Zinner of Yeah Yeah Yeahs who mixed their EP Hands On Fire, and former Smashing Pumpkin James Iha on the production end. The result is exactly what you would expect. Well maybe not... think The Vaselines on a
wonderfully chaotic acid binge.