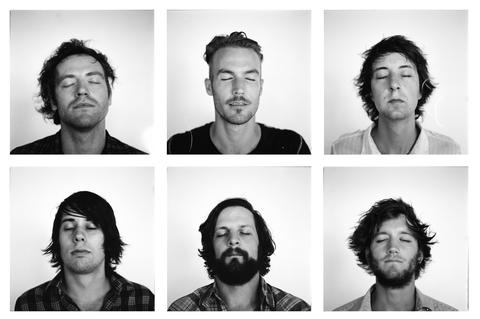 Listen to Show Me Your Eyes

"Music as exciting to watch being made as it is to hear...these Canadians own a sound that's at once incredibly intricate, and simply enjoyable" - Consequence of Sound (Best of CMJ 2012 feature)

"Royal Canoe have established themselves as musical mad scientists, throwing rock, pop and hip hop into a blender to create catchy-as-hell, dance floor-ready songs with odd time signatures and distorted vocals." - The Uniter

"... a clever blend of aesthetics and genres executed with a confidence and expertise usually reserved for more established groups." - This Music Doesn't Suck

Royal Canoe is a group of musicians on a mission to construct ambitious, inventive music. The songs are thick with catchiness, rich in rhythm and are consistently pushing against the boundaries of pop music.

They spend almost every day in a shit-hole rehearsal space writing hooks, singing through effects pedals, scrawling lyrics on scraps of paper, and constructing heavy beats in odd time signatures. They create samples by running conventional sounds through unconventional pieces of gear, drumming on bathtubs and garbage cans, listening to Big Boi and manipulating bits of old records.

The band calls Winnipeg, Manitoba, Canada home – the enigmatic prairie city, which has served artists as both an abundant, creative watering hole and a debilitating quagmire. The city's mood swings from euphoric summers spent biking with beers, fence-hopping residential pools and climbing abandoned roof-tops to harsh, bitter winters that are countered first with defiance, then self-loathing, then denial, then "you've got to be fucking kidding me." Royal Canoe's songs are, in part, an effort to make sense of the resentment and romanticism of the city's divergent identities.

In 2012, Royal Canoe self-released a pair of EPs (Extended Play, Purple & Gold) and played just shy of 100 shows across North America, making stops at CMW, SXSW and CMJ (where they were named "Best of CMJ" by KCRW, Consequence of Sound and the New York Times). The band is preparing to release their full-length in 2013.