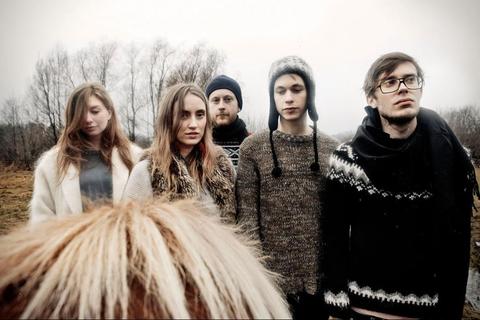 In And Out Of Weeks due March 5th, 2013
Highasakite Will Make Their American Debut at SXSW in March

Highasakite inhabits their own rare musical landscape, a place of long dark shadows, sudden flashes of glittering light, brooding silences and unexpected explosions of fierce percussion. Ingrid Håvik’s surrealistic lyrics and ardent vocals float out of another time and place, drawing you down into the breathless maelstrom created by her band mates. Progressive rock, Norwegian folk music, jazzy tribal drumming, spaced out synthesizers, zither and autoharp come together to create a deep, mysterious resonance, echoing the sounds your hear in the midnight dreams that often seem more real than anything you experience during your waking hours. Imagine Phil Spector producing Cluster, with a dash of Radiohead on the side, and you’ll have the general idea, but Highasakite brings their own singular vision to the party.

The band took flight when Håvik and drummer Trond Bersu met while studying jazz at the Trondheim Jazz Conservatory. They started as a duo, with Bersu on drums and Håvik singing and playing zither. After a few gigs, they enlisted producer Thomas Dahl (Krøyt) to help them capture the sounds they were hearing in their heads. “We wanted to combine the rhythm patterns I was composing with 60s American pop, Norwegian folk music and synthesizers,” Bersu says. With Dahl producing and playing bass and guitar, and their friend Øystein Skar contributing his synthesizer wizardry, they worked for six months to produce a collection of songs cryptically titled All That Floats Will Rain. This was an immediate success and Highasakite was named the best new act of 2012 by many Norwegian magazines and newspapers.

With their reputation in Norway secure, Highasakite is setting their sights on the American market with In and Out of Weeks. The five-song mini-album will introduce America to the band’s highly emotional music and their distinctive approach to songwriting and arranging. Tribal drums and throbbing, euphoric synthesizer open “Son of a Bitch,” a mid tempo rocker that alternates between Håvik’s propulsive, tongue twisting verses and wordless trills, underscored by Dahl’s swooping bass. “In and Out of Weeks” is a tense, moody ballad full of long sustained guitar notes, vast washes of spacey keyboards and dense layers of skittering percussion. Håvik’s somnambulant vocals capture the muzzy feeling of a sleepless night.

“Indian Summer” has a skewed rhythm halfway between a waltz and a tango, marked by pealing acoustic guitars, kaleidoscopic percussion effects and a soulful, wailing vocal from Håvik. “The song is a nostalgic look at my childhood, playing cowboys and Indians in a suburban forest. It’s the first song I wrote using a synthesizer.” The stories of soldiers returning from Iraq and Afghanistan inspired the quiet drama of “Whatever That Means.” Chiming synthesizers, zither and crashing cymbals highlight a choral vocal that delivers a feeling of quiet desperation. The music of Highasakite is unquestionably pop, but Håvik’s emotional singing and songwriting, and the band’s commanding wall of sound, conjures up overwhelming feelings that will leave listeners thrilled.

Håvik and Bersu started Highasakite while attending the Trondheim Jazz Conservatory. “We fell in love, but he was always gone, playing in bands,” Håvik recalls. “I was in bands as well. We thought we’d have more time together if we started our own group.” Both came from families that encouraged their musical ambitions. “My mother was a conductor and singer,” Håvik recalls. “When I was young, she got a mike that plugged into the CD player, stuck it in my hand and had me sing along with Mariah Carey. I was in church choirs, but didn’t like it much. Later on, I realized choir singing was good training for my voice.”

Bersu’s grandfather sang and played Norwegian folk music on his accordion. “I liked folk as a kid,” he says. “My grandfather let me press the buttons while he played, but I was more fascinated by the drums. I got a Mickey Mouse drum kit when I was four or five and destroyed it. I made my own kit out of empty ice buckets. My inspiration was Metallica and American punk bands like Green Day.” Bersu discovered jazz in high school. “I joined the jazz ensemble and studied composition and percussion at University. I was set on having a career in music.”

“I thought about being a jazz singer,” Håvik says, “but I didn’t sing with a band until University. I never thought about music as a full time possibility until I’d been in bands for a couple of years. The singers were all songwriters too, but writing lyrics intimidated me. Finally, one of my teachers encouraged me and got me started writing.”

Håvik eventually showed her songs to Bersu. They started performing and decided to make a record. In May of 2011, they went into the studio with friend and producer Thomas Dahl (Krøyt). “We recorded drums, autoharp, zither and vocals, with Thomas improvising guitar and bass,” Bersu explains. “Then my high school friend Øystein Skar came in and added synthesizer parts.” Øystein was a classically trained pianist who changed his focus to pop, rock and fusion and works as a composer and sideman when he’s not on the road with Highasakite.

After six months of intense exploration, the trio released All That Floats Will Rain in Norway in February of 2012 and began playing dates to support its release. “At first, it was challenging to play the songs live,” Bersu says. “We’d recorded all the tracks separately and had to find a way to translate the studio recordings to the stage. We added Marte Eberson, a friend of Ingrid’s, on synthesizer and my friend Kristoffer Lo on guitar, percussion, flugabone and tuba.” Lo’s electronic approach to tuba has made him a favorite sidemen for metal, jazz and noise bands. The band’s live performances struck a chord with both critics and the public. They were a hit at Norway’s Oya, Hove and Pstereo Music festivals last summer and have attracted great attention on international showcase festivals like Iceland Airwaves, Berlin Music Week, and Eurosonic to mention a few. They are looking forward to their American debut at SXSW in March.

They’re currently at work on their international debut album, due out in late 2013.

Highasakite EP is out worldwide on August 20th 2012. The debut album will follow early 2013.