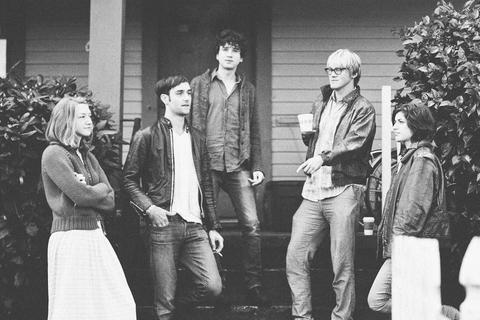 Listen to Find It Of Use

There is a stillness between kissing lips that belies the beating hearts connected to them, a calm in the simple gesture that holds tumultuous emotions close, keeping their caprice from pulling you apart. For the past three years, Radiation City has scored the soundtrack to relationships such as these. Moments where Quiet/Bombast, Future/Past, Man/Woman, Hope/Fear are conjoined; from their use of modern electronic sounds and the restraint of classic bossa records, to the urgency and harmony of northern soul, the band has codified seemingly disparate ideas into a sound and ethos that is at once refreshing and classic. Their second LP Animals In The Median will be released May 7th.

Founded in 2009 amid the glow of one budding love affair, Radiation City quickly blossomed into a family, finding itself with a second couple and another multi instrumentalist besides. If the quintet's early live shows and debut LP The Hands That Take You quickly earned them a reputation as one of Portland, Oregon's most promising young acts, the subsequent national tours and 2011's EP Cool Nightmare made good on that promise. The band's expanding soundscape of new romanticism has drawn accolades from NPR, Time, and KEXP to name a few.

The new full length features 12 songs recorded over the span of a year in both rural Washington and urban Portland. You can hear a focused songwriting, lush arrangements, and gorgeous harmonies. You can hear the celebration and lament of a sea change year which saw the passing of matriarchs, the betrayals and betrothals of loved ones, the baring and bruising of hopeful hearts in an increasingly dangerous world. Moreover, you can hear a band edified, coming into their own in rich and simple gesture.