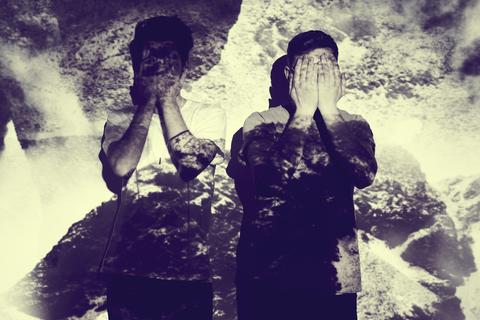 Man Without Country are a Cardiff-based duo in their early twenties. Formed in 2007, their sound encompasses glacial guitar ripples spliced with electronic ambience and synth-pop pulse, yet with the ability to morph into a capital-A Anthem when you least expect it. In terms of influences, the band name-check some of the standard-bearers for this kind of stately, FX-heavy swirl: Radiohead, The National, Sigur Ros, M83, but they’re also keen to note the influence of the grainy nighttime electronics of Burial and Four Tet.

Man Without Country’s debut album ‘Foe’, produced entirely in Tomas’ bedroom, and mixed by the legendary Ken Thomas (Sigur Ros, M83) carries a sense of unease and paranoia. It’s 45 minutes of music which comes off as complex and complete. Where often the music is calming, Ryan’s lyrics are anything but. “They are personal, and very bitter,” the vocalist agrees.

Man Without Country’s live show is filled with throbbing bass, glistening synths and pulsating drums... their shoegazing, delay-drenched sound magnified magnificently. In the past year the band has supported the likes of M83, Moby, SBTRKT, Active Child, and I Break Horses, as well as playing headline shows and festivals all over Europe.