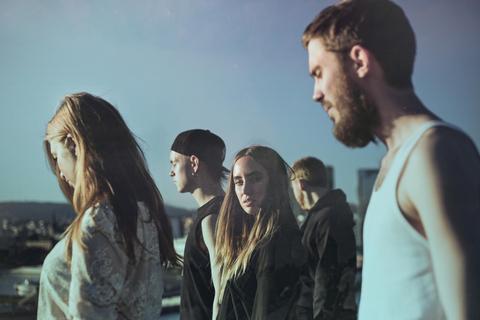 “The band is an intriguing proposition, matching blissful indie pop with electronic inflections to a rare sense of fantasy” - Clash Music

It’s been 6 months since Highasakite released their debut EP on Propeller Recordings to international acclaim. It was an EP that had it all; the hit single, the unique soundscape, the distinctive lead vocal, and the surrealistic lyrics. Since then, Highasakite have been keeping very busy. In-between tours and numerous summer festivals, the band have found time to record their long awaited international debut album, due out in February 2014. The first single from the album, “Since Last Wednesday” will be released worldwide on 20th September.

While their earlier songs were inspired by childhood and nostalgia, the theme of the new album focuses on the undercurrent that’s going on behind closed doors; the silent battles at home, and the longing to get away. It introduces a darker side to Ingrid Helene Håvik´s lyrics, but fans of her surrealistic, and often innovative, views of the world won’t have to worry - it’s all there.

Few bands manage to be so accessible and yet so complex and experimental. Highasakite are masters of balancing the sweet with the bitter. They have the musical skills to keep it interesting, the melodic hocks to make it memorable, and the pop sensibility to make it enjoyable.

The last year has seen the band travelling around the western hemisphere. After having toured Europe and the US, visiting Berlin Music Week, Iceland Airwaves, Eurosonic, SXSW, The Great Escape, Tallinn Music Week, Reeperbahn Festival, Roskilde, the SPOT festival and many more, the band is now ready to take on new challenges.

Quotes (from the released EP):

“Beautiful music from Highasakite at Øya Festival. Holy shit this was a crazy band! I loved it!” - Bon Iver

“Finally it was Norway's Highasakite who dressed the stage in lights and feathers and whose music was equally adorned with extras, like autoharp and coronet. But unlike, say the grand drama of Of Monsters and Men, the songs stayed more in the pop realm, like on "Son of a Bitch" from their new EP. That's a far more appealing sound to these ears.” - Brooklyn Vegan

“The selection showcases a band that, though technically tight, likes to spread out and stretch its strong melodies tent-like over top of sharp percussion and hazy guitars and synthesizers. Though the songs vary in their degrees of electro-pop, jazz, prog-rock and folk influences, they all have an epic, echoing resonance to them.” - CMJ

“The Heron is very beautiful – at first, you only hear Helene’s voice and a little choir in the background; adding more and more instruments the song builds itself up marvelously. The songs are riddled with uncommon sounds, so, you may think this music comes from another universe.” - Nothing But Hope And Passion

“Highasakite, comprised of members Ingrid Helene Håvik, Trond Bersu and Øystein Skar have created a four-song dream-pop escape that recalls the music of Lykke Li, Neon Indian and Of Monsters and Men. With their infectious hooks, ethereal synths and confident vocals, the trio has positioned themselves as a band to watch.” - Paste Magazine

“Frontwoman Ingrid Helene Havik's clarion call soars above a din of tambourines, handclaps, and her loosely strummed zither sounds as carefree as sticking your head out an open window on the way to the beach.” - Pitchfork

“A quintessential heartbreak gem that’ll knock the air from your lungs, note by note.” - RCRD LBL

“Reality can be boring. Maybe that’s the logic behind indie pop quintet HIGHASAKITE‘s name. After all, they elevate common ground to the altitude of their sounds.” - Status Magazine

“They've already snagged a nomination for 'Best Newcomer' at the Norwegian Grammys, but this female-fronted band is about to break out in America in a big way. They garnered high praise at SXSW last month, and now they're hitting the summer concert circuit and hypnotizing fans across the country with their dreamy chillwave tunes.” - Teen Vogue

“Like that of fellow Scandinavian musicians Lykke Li and Niki & The Dove, the band’s sound is an ecstatic mix of pop melodies, exuberant instrumentation (led by Håvik’s harp and zither and Skar’s synths), and the angelic beauty of Håvik’s soaring vocals.” - Under the Radar Mag