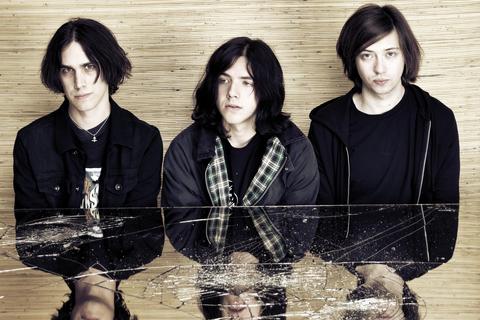 Hypnotic, Arabian funeral. Depression in the desert. Sepia rainbows.
This is the psychedelic nightmare spun by The Wytches, who are spreading their subversive message in the dark guise of 50s surf riffs, desert whips, melancholic shuffles and a kaleidoscopic stage performance that will put you under.
Formed in November 2011 after moving down from Peterborough, this Brighton based Surf/Doom three piece comprise of guitar/organ/lead vocalist Kristian, semi-professional poker playing drummer Gianni, and fiercely eloquent bassist Dan, who is currently writing a science fiction novel by the name of The Curious Adventures of Charlie Revel.

The Wytches gained a strong following from their debut single, and self produced video 'Digsaw', and have been gaining in notoriety ever since thanks to their spellbinding live shows. Think Nirvana's Bleach, The Arctic Monkey's Humbug, The Horrors' Strange House and you're half way there; because with songs that make you feel dirty to sing, and undeniable rhythm that will have you moving against all efforts to resist, the Wytches are a band you will not easily forget.

2013 saw The Wytches support a rich variety of acts including Death Grips, The Black Angels, Chelsea Wolfe, Bosnian Rainbows, Japandroids, Temples, Metz, Superfood, Future Of The Left, The Cribs and Drenge. They released their second single, the AA-side Beehive Queen/Crying Clown, via HateHateHate Records on June 3rd, which sold out almost immediately. Following the success of Beehive Queen, the band re-released Digsaw as a limited white label 7”. In November, the band released a second AA side single, ‘Robe For Juda / Wide At Midnight’ via HateHateHate records and announced signing a publishing agreement with Domino Publishing. This has gained them more radio play from the likes of Zane Lowe and Huw Stephens (for which the band recorded a live session at Maida Vale) at BBC Radio 1, and Marc Riley on BBC 6 Music who has had them in for live sessions twice this year. On 4th February 2014 The Wytches announced they had signed to Heavenly Recordings.