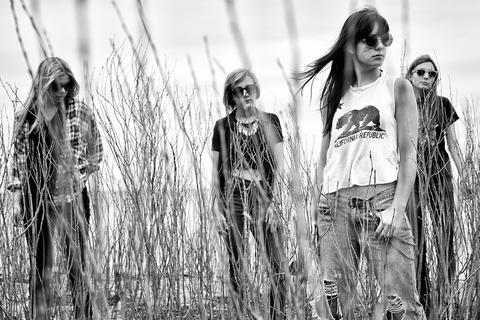 The Beaches – named after the area of Toronto where they live, but they appreciate the accidental pun – are good girls gone great. Proud teen pioneers of the new wave of fem-rock alongside Haim, their sassy, saw-toothed alt-rock songs recall The Strokes, Elastica, The White Stripes, Metric and The Runaways and writhe, snarl and spit the kind of romantic defiance, youth rebellion and peer solidarity that makes the 16 to 19-year-old female such a formidable force for rock. But that they got here by rejecting a life in thrall to The Mouse is what makes them true counter-culture heroes.

Sisters Jordan and Kylie Miller, children of a household where 70s and new wave was a stereo staple, began playing and writing songs together shortly after Jordan (the eldest) picked up a guitar at the age of six with dreams of being Sheryl Crow. “Initially I wanted to sing,” Jordan says, “but I picked up the guitar and my parents said ‘since we’re getting you a guitar you have to practice every day’. And I did.”

For two years, Jordan and Kylie played cover songs together, then they tired of recreating other people’s songs and started penning their own. They formed a band – Kylie on guitar, Jordan on bass and vocals - with two brothers called Sisters Others And Brothers and, when the brothers lost interest in 2008, recruited Megan Fitchett on keyboards (later replaced by Leandra Earl) and schoolmate Eliza Enman-McDaniel on drums to form the all-girl Done With Dolls when they were aged between eleven and thirteen. “We figured that it’d be really cool to start an all-girl band,” Jordan explains. “I think every young girl who’s interested in music has that sort of fantasy.”

When The Beaches were unveiled at the start of 2013 – an edgy, dangerous gang of lascivious outsiders - they were a revelation. Their songs had a contemporary punk pop punch, an acerbic new wave cool and the odd alt-LA hook that helped their music flip from snarly to sunny as their whims dictated.

Back in Toronto, the reaction was positive. Their crowds grew strong thanks to a university tour with Mother Mother, and their newer material - including the epic ‘Four Words’ and the catchy ‘Echoes And Stardust’, destined for release in 2014 - have become more experimental, mature and synth-based, and find Jordan exploring more mystical themes. “I can't keep writing about boyfriends and partying for the rest of my life,” she laughs. “I wrote a song about this Indian goddess that I was interested in. We haven't really named it yet but it's about the Indian goddess Kali, and about destruction and regrowth. I've always been interested in those two concepts and I wanted to explore that lyrically."

So as The Beaches charge into 2014 all guitars blazing, how do they feel about being called the new Haim? ''We all feel really happy when people make those connections,” says Leandra. “There's this new movement right now of all-female acts and we're proud to be a part of that. It's way more a positive thing than a negative." ''We're also a different sound than anything that's out there right now,” adds Jordan. “Even though we are a girl band, we're not exactly Haim. We're individual but I love Haim so much, they're so talented, I love being compared to them."