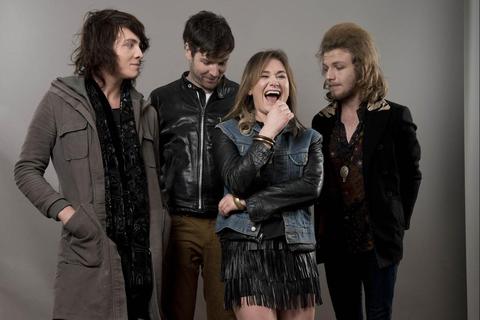 No Sinner, lead by 25-year-old Colleen Rennison is a force of nature, a post modern soul belter and queen of rock, a hard-singing, hard-loving, hard-drinking, hard-working throwback to those her and the guys grew up listening to, including Nina Simone, Tina Turner, Rolling Stones and Diana Ross.


Rennison learned from a cousin that her name was “No Sinner” spelled backwards, is now the singer of a raucous rock band with guitarist Eric Campbell, drummer Ian Browne and rotating bassists Bradley Ferguson and Parker Bossley. Their debut album, Boo Hoo Hoo, includes six tracks from a 2012 EP released on Vancouver indie First Love Records.


Boo Hoo Hoo travels from the juke-joint jump blues of its title track and the Delta swamp of “Runnin’,” with a chugging Creedence beat, to “Love Is Madness” with a Motown bass line and a Dusty Springfield “Spooky” vibe. Other highlights include a cover of Nina Simone’s version of Nat Adderley / Oscar Brown Jr.’s “Work Song”, the soaring, affirmative gospel revival of “Rise Up,” the sensuous plaint of “If Anything” and the feedback-charged “Devil on My Back,” a band composition that features Black Mountain’s Matt Camirand.

No Sinner’s music is about the clash between the sacred and the profane, the preacher and the devil, the sins of Saturday night at the local watering hole being washed away in the redemption of Sunday morning in church; in short, the very contradiction at the heart of rock ’n’ roll.

“It’s a consistent theme in my life to negotiate between being animals and yet righteous,” explains Rennison. “How we need a healthy dose of both good and evil in our lives. Music itself is very much a medium between us and the spiritual world. The things we express in our songs run the gamut from sinful to celestial.”


On returning to her hometown from New York, Vancouver, Colleen started writing with Parker Bossley (formerly of Hot Hot Heat) and joined up with a rotating backing band, for a weekly Thursday night residency at Guilt and Company, a new club in Vancouver’s Gastown district. “I honed my chops, my stage confidence, my style and versatility,” explains Colleen. “I also learned to play with other musicians.”

“So much of the music I started listening to as a girl came from churches and gatherings where people congregated and sang their blues away,” she says. “It’s a dirty business loving me / It’s going to be hard sometimes,” she warns on the sultry “If Anything.” “That’s a disclaimer for anyone who wants to get involved with me,” laughs Colleen. “I’m warning you now.”

With her in-your-face stage presence and down-to-earth T-shirt and shorts (“I’d like to think I’m bridging the gap between trash and class,” she says), Rennison is an old soul, wiser than her years might suggest. “I love the idea of these women who very much lived in a man’s world, touring on the road,” she says. “Just the idea of the things these women must have seen, the lives they led and how it came out in the music has always inspired me.

“I’ve always connected with folklore and history, a simpler time of life. Since I was a kid. I’ve always felt a little out of place in the modern world.” You can hear that reverence for the past in Boo Hoo Hoo, along with a desire to drag it kicking and screaming into 2013.

“I just want to play music with people I love and respect” says Colleen. “I want to see the world. People who come to our shows leave happy. And as long as you keep making music that people want to listen to, how could you go wrong? Colossal success would be nice, but right now we’re just concentrating on the quality and, hopefully, the rest will fall into place.”

No Sinner don’t mind you comparing them to other people, but they remain true to their own instincts.“We just write whatever comes to us,” insists Rennison. “We’re fans of a variety of different sounds and kinds of music. We’re inspired that artists like Black Rebel Motorcycle Club, early Kings of Leon and Lucinda Williams brought it back to the basics and breathe in new life. Luckily, we’re in between so many styles, we have the liberty to do what we please. We really don’t have a formula. We’re not here to be the next anybody. We’ve got our own mark to make.”