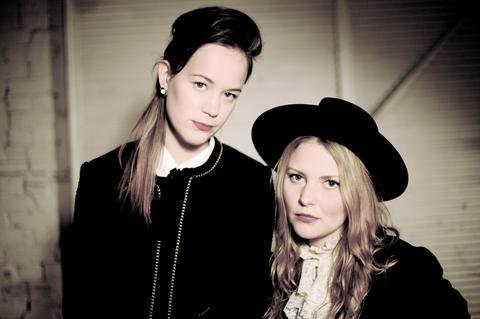 First uniting in small-town Manitoba through a mutual love of the arts, Stefanie Blondal Johnson (guitar/vocals) and Jodi Dunlop (drums) began painting together during the off-hours of their respective summer jobs. The partnership born of brushes and canvas soon evolved into one of road-worn six-strings and broken drumsticks. “We had totally different influences at the time,” Johnson recalls, “but like our painting, it just felt so natural making music together.”

Their debut EP was recorded with punk pioneer Ron Obvious (D.O.A., The Subhumans) and showcased promising young songwriters looking to carve out their niche. It earned them slots at festivals like CMW and NXNE, crammed club shows across the country, and a highly-coveted 2011 residency at the Banff Centre for the Arts. It was in Banff that, engulfed within an extremely fertile creative environment, the groundwork was laid for the ladies’ latest offering.

Though it comes only a couple of years after the EP, Desire’s Despair showcases an exponentially more defined and explosive band. The music is clamorous and captivating, with hints of everything from ‘60s pop and alt-country to early punk and garage rock – organic and unadulterated by studio trickery. From Johnson’s powerful leads and subtle harmonies through to Dunlop’s manic vigor, Mise en Scene don’t pull any punches; in fact, they’re throwing haymakers.

This sharp focus can be attributed in part to the team of revered producers with fingerprints on the album – Howard Redekopp (Tegan & Sara, The New Pornographers), Howard Bilerman (Arcade Fire, Cœur de pirate), Tony Berg (Beck, Jakob Dylan), and, once again, Ron Obvious; however, much of it can also be attributed to Dunlop and Johnson’s cemented confidence in who they are and what they do.

Recording their debut, the band frequently relied on external input during the decision-making process; this time out, that wasn’t the case. At all. “This time, it was all about us,” Dunlop states bluntly. “We were a lot more involved in every single aspect and detail of this record. We had a very specific sound we wanted for each instrument, and especially for Stef’s voice.” The result is a band making a statement – and one that can’t be ignored.

Johnson’s lyrics explore the two emotions cited in the album’s title and, in true rock ‘n roll fashion, focus predominantly on the latter. “It’s about things not working out how you’d hoped; how you’d longed for,” the singer explains, and be it the faded lustre of a summer romance or a discovery of deceit in one once trusted, she manages to make deeply personal experiences seem universal.

Best of all, though, is that the despair can be danced away in a delightfully sweaty dive on a sticky dance floor as, from the stage, Mise en Scene exudes an undeniable energy – one that commands attention and can instantly ensnare an idle pair of ears. Audiences will have a chance to experience that energy first-hand as the pair returns to the road domestically and abroad in 2014 after a 2013 that already saw them travel to the United States, Europe, and the United Kingdom on multiple tours and festival appearances. “It’s all about climbing the ladder,” Johnson says, and Dunlop echoes the ethos. “The way we perform and carry ourselves – it’s like we have something to prove,” the drummer says. “And we do. It seems like people are constantly doubting us, so we always have to exceed their expectations.”

So far, they have, and with Desire’s Despair, they’ve done it once again.