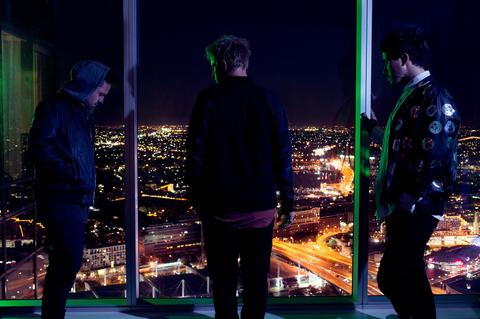 Sydney based trio, RÜFÜS DU SOL are carving out a place for themselves on dancefloors and in minds the world over. They started three years ago on a rainy night in a Byron Bay living room. Now with a GOLD selling #1 debut album in their home country, the band are aiming for the rest of the world in 2014.

The story starts three years ago, when a couple of friends found themselves alone Australia’s Byron Bay hinterland, usually an oasis, the Bay was experiencing some unseasonably wet weather. The friends were rained in, trapped, with no food and about $23 between them. Some amongst the party decided to leave the house in search of sustenance. A couple of destitute guys picked up some keyboards and decided to jam. 14 hours later they had 2 songs and knew they wanted to make more. Legit story.

3 years later Jon, James and Tyrone are Australian DIY band RÜFÜS. Releasing 2 EPS on their own label, playing stages as far away as Moscow and New York, the band had built a strong online following. It was time for an album.

They locked themselves in a disused water tank. Emerging 8 months later with their debut record ATLAS (due for a world wide release mid 2014), a collection of songs that slip on the precipice of light and dark. Equal parts sun drenched melodies and late night dance floor rhythms. Debuting at #1 on the Australian album charts the record propelled the band into the spotlight. Selling out 17 back-to-back shows as they built a cult following with strong support from Australian taste making radio station Triple J and playing stages in New York, London, Paris and Berlin.

Expect to hear more of RÜFÜS DU SOL as they tour the U.S in March off the back of their debut U.S single ‘Desert Night’, available now.