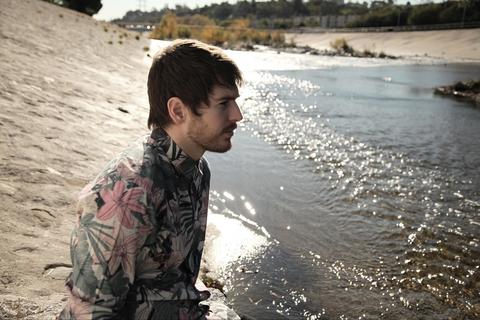 Kauf self-released 2 songs, Relocate and When You're Out, in 2011, with heavy drum production, dense, cinematic synth buildups and his own high-pitched, echo-laden vocals. They found their way to Dan Whitford of Cut Copy, who soon after signed Kauf to Cutters Records for a 4 song EP. This led to DJ sets around his home base, Los Angeles, premiering his live show at Mexico City's M.N. Roy, followed by a West Coast tour with Cut Copy, remixes of Tony Castles, Moons and one soon to be released for Poliça.

His first EP, As Much Again, was released on Cutters records in July 2013, and his full length debut is nearing completion. His first single, Relocate, has been remixed by Moons (No Recordings), Psychemagik (Psychemagik), Nile Delta (Cutters), and Mind Enterprises (Double Denim).

XLR8R - "With percussive hits and the decay of various delays and reverbs filling every corner of the track, "Blood Mouth (Kauf Remix)" is lush and expansive, while still coming laced with a healthy amount of groove. The remixer keeps his production grounded to a steady-yet-understated four-on-the-floor rhythm amidst a dazzling array of cosmic synths which weave in and out of focus from one moment to the next."