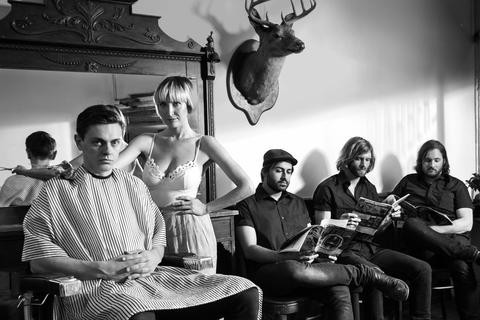 Upon returning to Toronto from a final European tour with his band, Peter Dreimanis sat in a candlelit bar paying little attention to the beat-up acoustic guitar being passed from patron to patron around him; that was until it found its home in the hands of Leah Fay. He sat listening dumfounded, realizing he had met his match. Clearheaded the next day, he started his search for the stranger from the bar with whom he seemingly shared a soul. He found her; they founded July Talk.

After linking up with Ian Docherty, Josh Warburton and Danny Miles, the band created a signature sound that is not easy to pigeonhole. Imagine Tom Waits and Amy Millan shouting whiskey-soaked lullabies while backed by the members of Crazy Horse and youʼd have a good start. Striking a frenzied balance between Americana and dance-floor-filling indie-rock, July Talkʻs Beauty and the Beast aesthetic burns a little going down, but is sure to warm your belly and have you coming back for more.

After a year of relentless touring with the likes of Billy Talent, Matt Mays, Arkells, Sam Roberts and Besnard Lakes to name a few, their live show has gained a reputation as one of the most high energy, magnetic shows in the country. After a national American tour in the summer of 2013, they went into the studio to polish off a release slated for October 15th, on Sleepless Records. Not only will they continue their ruthless touring schedule in North America around this release, they plan to head across to Europe & Australia in the New Year.