Nightmare and the Cat 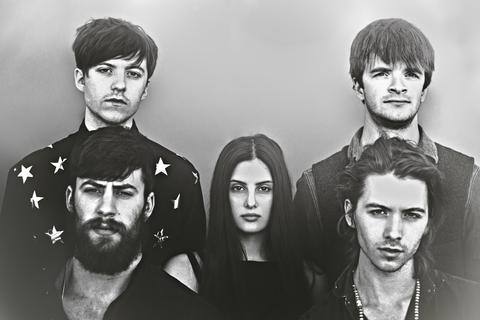 Los Angeles-based rockers Nightmare and the Cat formed in 2010, but the musical powerhouses that lead the five-piece —  22-year-old front man Django Stewart and 25-year-old guitarist Sam Stewart — go way back. All the way back.

Growing up in England, Sam watched as his 6-year-old brother Django developed a fanatical love of James Brown. Django saw his older sibling pick up a guitar for the first time at age 12 and immediately master a Nirvana songbook. But while the two pursued parallel musical paths — Sam with Blondelle, Django with Midnight Squires — they didn't contemplate forming a band together until Sam rang up Django and asked his little brother to join him for a songwriting session in L.A. three years ago.

"I was just so fucking happy when he said that," Django remembers. "He came for 10 days, and we wrote five songs," Sam recalls, joking, "it was probably our most prolific period." The results were too good to ignore, and their new band, their first truly joint effort, was born.

Named after a track the brothers adore by obscure artist Anthony Harwood, Nightmare and the Cat quickly grew to a five-piece as the pair recruited Sam's girlfriend Claire Acey, an accomplished singer and multi-instrumentalist, and Spike Phillips, the drummer from Midnight Squires (Scott Henson, another Squires alum, joined after the group's bassist Julie Mitchell relocated to Chicago). Sam says their original sonic plan was simple: "We wanted it to be a mixture of Jeff Buckley vocals and the Pixies' music."

8:00PM Nightmare and the Cat