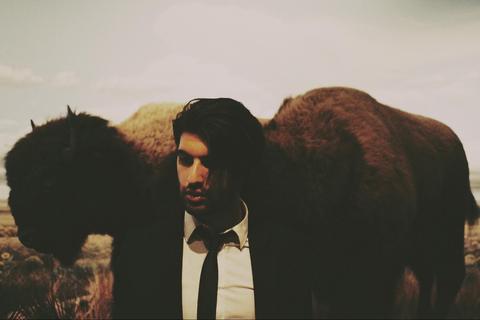 “My brothers and I were surrounded by music growing up,” explains Kamtin Mohager, the genre-jumping singer/multi-instrumentalist behind The Chain Gang of 1974. “Not Beatles albums or anything like that; more like the Persian records our parents played all the time. And when we got older, it was up to us to discover everything.”

Born in San Jose and raised in Hawaii, Mohager spent his first 13 years playing inline hockey and dreaming of being drafted by the NHL. His thoughts shifted to music soon after a move to Colorado, however. All thanks to the sinking feeling he felt after seeing the final scene in Real Genius. That’d be the part where “Everybody Wants To Rule the World” kicks in, tugging at the audience’s collective heartstrings like only the finest Reagan era records can.

“That’s definitely been the goal with my music all along,” says Mohager. “The emotion isn’t just in the vocals or the lyrics. It’s in the songwriting itself.”

That’s abundantly clear on Wayward Fire, a record that’s nearly as restless as The Chain Gang of 1974’s last two self-released LPs, White Guts and a collection of early cuts called Fantastic Nostalgic. The way Mohager sees it, his debut was “all over the place, from a piano ballad to songs that sound like Black Rebel Motorcycle Club, Primal Scream or Justice.” And while White Guts funneled three years of instrument-swapping, sample-splicing experience into a lean, focused listen, Wayward Fire melds the standout moments from that release onto Mohager’s most fully-realized vision yet.

“From Phil Collins to Fleetwood Mac to the Stills, all of my favorite artists have put out albums,” explains Mohager. “I wanted to do the same thing, not just release a record you kinda skip through.”

No wonder why the laser-guided synth lines of “Undercover” and the rather epic “Hold On”—crowd pleasers that hint at everything from LCD Soundsystem to Talking Heads—make perfect sense alongside such shifting soundscapes as the shimmering keys of “Don’t Walk Away,” the hands-in-the-air hooks of “Taste of Heaven,” and the choruses that cut through the rain clouds in “Matter of Time.” Of course, it doesn’t hurt that Mohager balances his minor-key melodies with bold, bloodletting lyrics.

“Lyrically, it’s a dark record—all about fear, jealously and love,” he says. “Even the parts with hints of happiness have some doubt thrown in.”

Some closure came with the final cut, though, as Mohager moved to L.A., severed the ties of the two-year relationship that fueled Wayward Fire, and raised the curtain on what’s next, proving that this particular film has just begun.