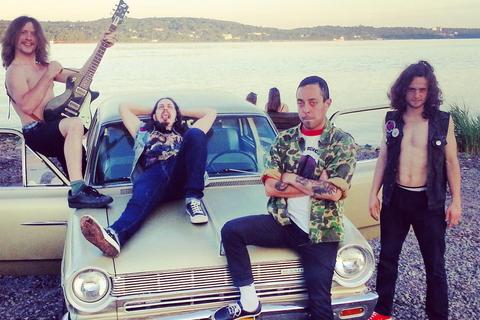 It's a shame there aren't more bands like Dirty Fences these days. You know what we're talking about: Acts made up of musicians who know how to play their instruments, write timeless songs and have a blast while doing it. Fresh off releasing a well-­‐received self-­‐titled EP on Volcom last year the band are now ready to unleash their full-­‐length Too High To Kross—and if you think rock n' roll is dead, get ready for your world to be flipped off its axis.
Bassist/vocalist Max Comaskey, vocalist/guitarist Jack Daves and drummer/vocalist Max Hiersteiner began playing together while attending high school in Boston and in 2009 they moved the band to Brooklyn and recruited Max Roseglass on guitar/vocals. Dirty Fences refer to themselves as a gang and that mentality is evident in every razor sharp riff and perfectly executed harmony on Too High To Kross, an album that evokes early American rock and punk acts such as Red Kross, MC5, Johnny Thunders, The Ramones and The Stooges.