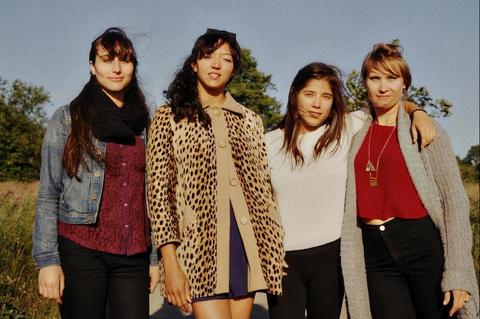 Seattle’s La Luz recorded their debut EP, Damp Face, in a small trailer on a hot August day. But barring the inevitable “no-AC-in-the-van” summer tour calamity, La Luz runs cool. Their brand of coolness isn’t about distance or affect; it’s a mood, and—sue me, but I’m about to totally rip off Zelda Fitzgerald: Something about this music vibrates to the dusky, dreamy smell of dying moons and shadows. So yeah, that kind of cool.

Still, La Luz’s live shows, more than most these days, are about connection. It’s evident that the four ridiculously talented ladies on stage are not only playing music with each other, but for each other. And they engage their audience as well. Like a proper punk band—which they are not— they give you shit for not dancing. They convey a gritty self-possession, a sense that they’ve been there and back again. And, like the expert, but seemingly effortless, surf licks and meandering bass lines that rise and fall throughout their songs, their mocking is playful and dreamy and disarming enough to get most of the crowd (and sometimes the keyboard player) dancing down the center line of a soul train.

But as any half-assed Freudian will tell you, there can be no meaningful connection without first weathering some dark and lonely times. Here comes the chilly part: What makes La Luz stand out—and stand out fast—the band has only been playing together for a year and people took notice almost immediately—is that this is a band that embodies that most elusive slant on the human condition: longing, and the fleeting relief that tags alongside deep desire.

In Spanish, La Luz means “light” and that’s the perfect thing to evoke when your songs give the illusion of veering in the opposite direction. But lift out most any lyric—which is a good excuse to give a closer listen to the delicate, four-part harmonies that are fast becoming the band’s signature—and you’ll find that the aches and pains of love and loss, of living in a world where no foothold is ever a promise—all this is delivered with a nuanced dose of perfectly timed exhilaration, like the whole thing might just be worth it in the end.

Last spring, La Luz returned to that steamy trailer park to record It’s Alive – the much-anticipated follow up to Damp Face – with their friend and engineer Johnny Goss. From the first get-psyched drum roll and eerie chords of “Sure As Spring”, the dinged-up pop gem that opens the album, the rest moves like a slow drive on a dangerous road, slinking and bending as the terrain shifts. On “What Good Am I?”, the lead vocals, and the swirl of harmonies that surround it, recall the Spartan haze of Mazzy Star’s misty-eyed super hit. Smack in the middle is the title track. “It’s Alive” is a jangly rocker with a spooky refrain, oodles of ooohs, and a marauding narrative that nails down the misty logic of the rest of the album. Two instrumentals, “Sunstroke” and “Phantom Feelings”, showcase the band’s beach jam surf chops, and fall perfectly between the chilled out heartache that surrounds them.