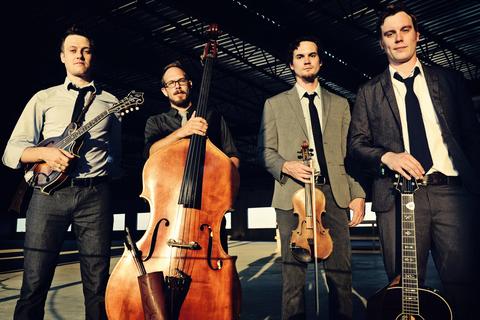 The band’s much-anticipated sophomore studio album WAVES, produced by Bil VornDick, was released in June 2012. Capturing the band’s sophisticated arrangements and fierce musicianship, the album showcases a number of original compositions and features guests Noam Pikelny (of Punch Brothers) and Futureman (of Bela Fleck & the Flecktones).

Dennis Ludiker, Brian Beken and Noah Jeffries met as youngsters competing in the National Oldtime Fiddlers’ Contest in Weiser, Idaho. Eventually they migrated to Austin, where they toured with an eclectic mix of bands and honed their songwriting chops before joining up with bass player extraordinaire Matt Mefford and forming MilkDrive.

In June 2009, the band recorded and released a live album, MILKDRIVE LIVE ’09, which spotlights the band’s vigorous picking technique and charismatic writing style. Their debut studio album ROAD FROM HOME, released in April 2011, combines haunting ballads with their signature instrumentals – “achieving a rootsy feel with a sophisticated edge,” as reviewer Graham Robertson put it. “A fantastic canvas for solo work.”

Andrew Dansby of the Houston Chronicle calls the MilkDrive repertoire “a virtuosic blast of bluegrassy string-band music.” With labels that range from jamgrass and nu-folk to redneck gypsy jazz, the band has built a following that’s as funky and friendly as they are. The group plays festivals from coast to coast every year, with stops in between at Colorado’s beloved RockyGrass Festival and at home at the Austin City Limits Music Festival.